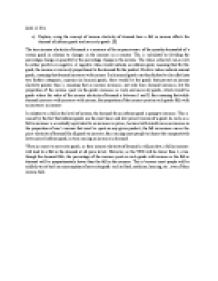 Explain, using the concept of income elasticity of demand how a fall in income affects the demand of inferior goods and necessity goods. [8]

Transfer-Encoding: chunked ﻿O/N 15 P21 1. Explain, using the concept of income elasticity of demand how a fall in income affects the demand of inferior goods and necessity goods. [8] The term income elasticity of demand is a measure of the responsiveness of the quantity demanded of a certain good in relation to changes in the incomes in a country. This is calculated by dividing the percentage change in quantity by the percentage change in the income. The values achieved can as such be either positive or negative. ...read more.

of the income spent on the goods increases as well, and necessity goods, which would be goods where the value of the income elasticity of demand is between 1 and 0, thus meaning that while demand increases with increases with income, the proportion of the income spent on such goods falls with an increases in income. In relation to a fall in the level of income, the demand for an inferior good is going to increase. This is caused by the fact that inferior goods are the most basic and low priced version of a good. ...read more.

When in comes to necessity goods, as their income elasticity of demand is still positive, a fall in incomes will lead to a fall in the demand at all price levels. However, as the YED will be lower than 1, even though the demand falls, the percentage of the income spent on such goods will increase as the fall in demand will be proportionately lower than the fall in the incomes. This is because most people will be unlikely to cut back on consumption of necessity goods such as food, medicine, housing, etc., even if their income falls. ...read more.