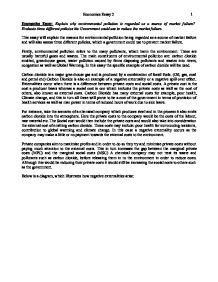 Explain why environmental pollution is regarded as a source of market failure? Evaluate three different policies the Government could use to reduce the market failure.

Economics Essay: Explain why environmental pollution is regarded as a source of market failure? Evaluate three different policies the Government could use to reduce the market failure. This essay will explain the reasons for environmental pollution being regarded as a source of market failure and will also assess three different policies, which a government could use to prevent market failure. Firstly, environmental pollution refers to the many pollutants, which harm the environment. These are usually harmful gases and wastes. The main constituents of environmental pollution are: carbon dioxide emitted, greenhouse gases, water pollution caused by firms disposing pollutants and wastes into rivers, congestion as well as Global Warming. In this essay the specific example of carbon dioxide will be used. Carbon dioxide is a major greenhouse gas and is produced by a combination of fossil fuels. (Oil, gas, coal and petrol etc) Carbon Dioxide is also an example of a negative externality or a negative spill over effect. Externalities occur when there is a difference between private costs and social costs. A private cost is the cost a producer bears whereas a social cost is one which includes the private costs as well as the cost of others, also known as external costs. Carbon Dioxide has many external costs for example, poor health, Climate change, and this in turn all these will prove to be a cost of the government in terms of provision of health services as well as man power in terms of reduced hours of work due to sick leave. ...read more.

In the case of carbon dioxide, the government could regulate the emission of each and every firm that produces carbon dioxide in the UK. They could set a cut-off level, which would legally stop firms from emitting more than the cut-off level. Although this sounds relatively simple to establish, it is in fact a tedious task. First of all, in order to regulate the emission of carbon dioxide a suitable method of measuring the amount would have to be established. This would cost the government, both in terms of time and money for the research in developing a suitable device. Also another problem would be the fact that it would requires regular inspections and check to be carried out, for which people have to be recruited. Even that would not stop some firms exceeding the cut-off level as not everyone can be caught doing wrong. Regulation is therefore more a way of reducing the scale of the externality rather than to stop it from happening. Although this is the case, Regulation also has its advantages in terms of costs and the fact that it is usually easy to implement. Below is a diagram that illustrates the effect of regulation. Through regulation the supply decreases from S1 to S2, thus also reducing the quantity produced and therefore reducing the external costs. The other method that could be used is the enforcement of permits. ...read more.

Its main aim is to push up costs for producers, thus decrease supply and reduce the quantity demanded. The overall effect being the reduction in carbon emissions. The energy tax was said to achieve two objectives. The first being the reduction in carbon emissions and the second being a reduction in unemployment. The main reason for unemployment falling is due to the decreasing costs for employment of labour, thus causing an increase in demand of labour. There have been many oppositions against this new tax. An argument is that the tax rate is too small and so there will be no major impact on large businesses. Another argument put forward is that a quarter of the emissions come from home users and so they too should be taxed in order to reduce emissions. Some economist also believe that carbon should be taxed rather then the energy. Finally the main argument against the energy tax is the fact that a tax has to be introduced in every country in order to reduce emissions. By only putting taxes on UK businesses, there wouldn't be much reduction in the world's carbon emissions and instead the competitiveness of UK firms would be worse off. To conclude with, there are no right or wrong policies; each policy has its advantages and disadvantages. In the case of environmental pollution, a direct tax method is said to be better off theoretically. Although this is the case it is still to early to say whether Gordon Brown's Energy Tax has worked. Economics Essay 2 1 ...read more.