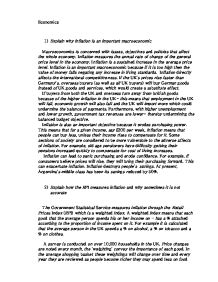 Explain why inflation is an important macroeconomic

Economics 1) Explain why inflation is an important macroeconomic Macroeconomics is concerned with issues, objectives and policies that affect the whole economy. Inflation measures the annual rate of change of the general price level in the economy. Inflation is a sustained increase in the average price level. Inflation is an important macroeconomic because if it is too high then the value of money falls negating any increase in living standards. Inflation directly affects the international competitiveness. If the UK's prices rise faster than Germany's, overseas buyers (as well as all UK buyers) will buy German goods instead of UK goods and services, which would create a substitute effect. ...read more.

Inflation is also an important objective because it erodes purchasing power. This means that for a given income, say �300 per week, inflation means that people can buy less, unless their income rises to compensate for it. Some sections of society are considered to be more vulnerable to the adverse affects of inflation. For example, old age pensioners have difficulty getting their pensions increased quickly to compensate for cost of living increases. Inflation can lead to panic purchasing and erode confidence. For example, if consumers believe prices will rise, they will bring their purchasing forward. This can exacerbate inflation. ...read more.

A survey is conducted on over 10,000 households in the UK. Price changes are noted every month, the 'weighting' convey the importance of each good. In the average shopping basket these weightings will change over time and every year they are reviewed as people become richer they may spend less on food and more on leisure. Also new goods and services come on the scene. For example, home computers in the last 10 years or the increased expenditure on cosmetic surgery in the last 5 years. Like any survey, the RPI might not be representative of actual expenditure patterns in the economy. The RPI is an average for the entire UK, it will not necessarily reflect accurately the situation regions in the UK. ...read more.