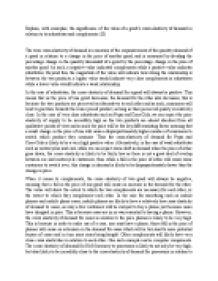 Explain, with examples, the significance of the value of a goods cross-elasticity of demand in relation to its substitutes and complements. [8]

Transfer-Encoding: chunked ﻿Explain, with examples, the significance of the value of a good?s cross-elasticity of demand in relation to its substitutes and complements. [8] The term cross-elasticity of demand is a measure of the responsiveness of the quantity demand of a good in relation to a change in the price of another good, and is measured by dividing the percentage change in the quantity demanded of a good by the percentage change in the price of another good. As such, a negative value indicated complements while a positive value indicates substitutes. Beyond this, the magnitude of the value will indicate how strong the relationship is between the two products, a higher value would indicate very close complements or substitutes while a lower value would indicate a weak relationship. ...read more.

Thus the cross-elasticity of demand for Pepsi and Coca-Cola is likely to be a very high positive value. Alternatively, in the case of weak substitutes such as motorcycles and cars, while we can expect some shift in demand when the price of either goes down, the cross elasticity is likely to be fairly low as there is not a great deal of overlap between car and motorcycle customers, thus, while a fall in the price of either will cause some customers to switch over, this change in demand is likely to be disproportionately lower than the change in price. When it comes to complements, the cross elasticity of two good will always be negative, meaning that a fall in the price of one good will cause an increase in the demand for the other. ...read more.

the price of phones will cause an extension in the demand for cases which will in turn lead to more potential buyers of cases and in turn more cases being bought. Other complements will likely have very close cross elasticities in relation to each other. One such example can be computer components. The cross elasticity of demand for RAM memory to processors is likely to not only be very high, but also likely to be incredibly close to the cross elasticity of demand for processors in relation to the price of RAM. This is because when purchasing such components, the customer is most likely looking to build a computer, and, as a computer cannot operate without all components, they are equally important, and as such, their cross elasticities will likely be very similar. ...read more.