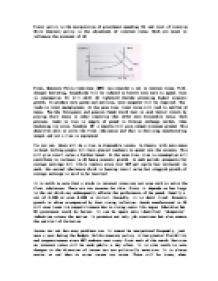 Fiscal policy is the manipulation of government spending (G) and level of taxation while monetary policy is the adjustment of interest rates. Both are meant to influence the movement of AD First, Monetary Policy Committee (MPC) can consider a cut in interest rates. With cheaper borrowing, households will be induced to borrow even more to spend. Rise in consumption (C) will shift AD rightward thereby promoting higher economic growth. To produce more goods and services, more manpower will be required. This leads to lower unemployment. At the same time, lower rates will lead to outflow of money. ...read more.

In theory, with more money in hand, working people will have greater tendency to spend into the economy. This will give retail sales a further boost. At the same time, rise in consumption will contribute to increase in AD hence economic growth. In such period, prospects for average earnings will likely improve since real GDP per capita has increased. As such, the second imbalances which is booming retail sales but sluggish growth of average earnings is said to be resolved It is worth to note that a slash in interest rates may not even work to solve the first imbalances. ...read more.

Subsidies from UK government would be better. It can be spent onto identified 'desperate' industries across the nation. It promotes not only job creations but also ensure the survival of factories Income tax cut has many problems too. It cannot be manipulated frequently, just once a year during the Budget. Unlike monetary policy, it has greater flexibility and responsiveness since MPC members meet every first week of the month. Decision on interest rates will be made public a day after. It is also worth to note changes in the direction of income tax are politically sensitive. It is always easier to cut than to raise income tax rates. There will be times, when politicians need to raise tax once again, especially when the budget deficit is ballooning ...read more.