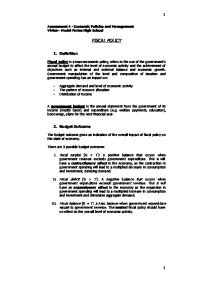 Assessment 4 - Economic Policies and Management Vivian- Model Farms High School FISCAL POLICY 1. Definition Fiscal policy is a macroeconomic policy, refers to the use of the government's annual budget to affect the level of economic activity and the achievement of objectives such as internal and external balance and economic growth. Government manipulation of the level and composition of taxation and government spending has an impact on: - Aggregate demand and level of economic activity - The pattern of resource allocation - Distribution of income A government budget is the annual statement from the government of its income (mostly taxes) and expenditure (e.g. welfare payments, education), borrowings, plans for the next financial year. 2. Budget Outcome The budget outcome gives an indication of the overall impact of fiscal policy on the state of economy. There are 3 possible budget outcomes I. Fiscal surplus [G < T]: A positive balance that occurs when government revenue exceeds government expenditure. This is will have a contractionary effect in the economy, as the contraction in government spending will lead to a multiplied decrease in consumption and investment, damping demand. II. Fiscal deficit [G > T]: A negative balance that occurs when government expenditure exceeds government revenue. This is will have an expansionary effect in the economy as the expansion in government spending will lead to a multiplied increase in consumption and investment and stimulates aggregate demand. III. Fiscal balance [G = T] a Zero balance when government expenditure equals to government revenue. This neutral fiscal policy should have no effect on the overall level of economic activity. The three main reassure of the budget outcome are: * Headline cash balance shows total cash outlays less total cash receipts and shows by how much government debt will be increased or decreased * Underlying cash outcome: calculated as total revenue less total outlays plus net advances. ...read more.

Adv: No change in the money supply and money borrowed is again injected through government spending No increase in net foreign debt Disadv: May cause rise in interest rates and crowding out of private investment, as government securities will only be successful if the interest rate offered is competitive with prevailing market rates. Higher interest rates raise the cost of borrowing for business. Therefore deficit financing may lead to extra government expenditure at the expense of private spending. Higher interest rates may increase capital inflow, raising the exchange rate and reducing Australia's international competitiveness. This may lead to a rise in imports and crowding out. Deficit financing leads to accumulation of national debt and sets up future obligations in interest. II. It can borrow from the RBA by instructing them to simply print more money to cover the shortfall. This is known as monetary financing. The government sells securities to the RBA who are obliged to buy and credits the governments account with cash for the deficit. Adv: No change in interest rates or accumulation of public debt Disadv: Danger of increased inflation May cause reduction in business and consumer confidence in govt. economic management Not used as govt. can enter financial markets directly now and sell securities. The 'tap and tender' system means the budget outcome no longer impacts on the conduct of monetary policy III. It can borrow funds from overseas financial markets by getting the RBA to sell government securities in return for foreign currency. The RBA holds this in its reserves and credits the Australian dollar equivalent of the loan to the Government's account. Adv: No increase in domestic interest rates Disadv: Accumulation of foreign debt, increase in CAD as interest payments increase the net income component of the CAD. ...read more.

Eg. The new Maternity payment will provide to all mothers, regardless of their income level. However, the measure to encourage low income earners to contribute more savings may have a positive impact on wealth distribution over time. The CAD is estimated to remind high around $44 billion, or 5% of GDP, the slightly improved from a $46 billion in the previous budget is due to export growth, as export revenue are expected to increase by 8%. Budgetary Changes The budget outcome is the result of both cyclical and structural factors which are working in opposite directions. Cyclical changes have a positive impact on the budget this year, with government revenue expected to rise 4.9 % for the last budget. Continued economic growth has underpinned strong employment and wages growth together with surging business profits are expected to see tax receipts increases. Structural factors will more than offset the positive impact of cyclical factors on the budget outcome. Discretionary changes announced in this year's budget, such as increases transfer payments and tax cuts, are expected to cause an $ 8.3 billion or 1.3% of GDP deterioration of the fiscal balance. Highlights of the Budget * The underlying cash surplus will fall from $4.6bn to $2.4bn * The fiscal surplus will fall from $3.0bn to $0.7bn * The fiscal policy stance has shifted from neutral to moderately expansionary * Higher income earners receive tax cuts of up $42 per week * Spending on the government's priority areas - family benefits, aged care and defence - is increased * Family benefits and superannuation rules have been changed to foster increased workforce participation and savings * A major criticism of the budget is that government policy is being driven by short-term political objective with a Federal election expected later this year 1 1 ...read more.