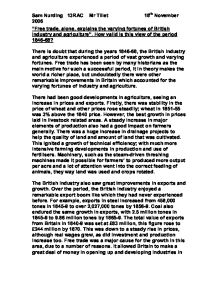 Free trade, alone, explains the varying fortunes of British industry and agriculture&quot;. How valid is this view of the period 1846-68?

"Free trade, alone, explains the varying fortunes of British industry and agriculture". How valid is this view of the period 1846-68? There is doubt that during the years 1846-68, the British industry and agriculture experienced a period of vast growth and varying fortunes. Free trade has been seen by many historians as the main motive for such a successful period, it in theory makes the world a richer place, but undoubtedly there were other remarkable improvements in Britain which accounted for the varying fortunes of industry and agriculture. There had been good developments in agriculture, seeing an increase in prices and exports. Firstly, there was stability in the price of wheat and other prices rose steadily; wheat in 1851-55 was 3% above the 1840 price. However, the best growth in prices laid in livestock related areas. A steady increase in major elements of production also had a good impact on farmers generally. There was a huge increase in drainage projects to help the quality of land and amount of land that was cultivated. This ignited a growth of technical efficiency; with much more intensive farming developments in production and use of fertilisers. Machinery, such as the steam-driven threshing machines made it possible for farmers' to produced more output per acre and a lot of attention went into the correct feeding of animals, they way land was used and crops rotated. ...read more.

Gladstone's 1853 budget abolished nearly all remaining duties on partially manufactured goods, food and nearly all remaining duties on fully manufactured goods, effecting over 350 separate articles. The 1860 budget continued this trend; only 48 import duties on articles left once duties were abolished on a further 375 articles. This was restricted down further in 1864 when Gladstone reduced the duty on sugar and halved the duty on tea. This provided a great stimulus to the British economy and industry. The 1860 Cobden Treaty alone produced a three-fold increase in trade with France by 1880. Nevertheless, with the benefit of hindsight, you can clearly see that there were other causes for such a period of success in both industry and agriculture. Firstly, Britain was still enjoying the advantage of being the first nation to industrialize and competition from abroad was limited. The US were having tremendous difficulty in supplying their own rapid increase of population and was held back by the Civil War of 1861-5; Germany did not become unified until 1871 so both of these countries were interdependent on British manufacturing exports. Secondly, the population growth increased the demand for such manufactured products domestically. Britain saw population increase from 27.4 million in 1851 to 31.5 million in 1871, which acted as a stimulus to industry. ...read more.

This was also a result from very little competition from abroad. In addition, the railway boom enabled livestock to be transported quickly and cheaply over long distances. This allowed farmers to sell into new markets. Finally, even the weather was kind to the farmers and gave mostly good summers and harvest between 1850 and 1873. In conclusion, you can see that free trade did help the British industry, by allowing cheap raw materials to businesses meaning cheaper products for consumers. This stimulated the economy and made British businesses more efficient from foreign competitors. However, you can only assume that free trade would not be as positive on agriculture, as farmers faced much competition from cheaper products abroad, and to an extend, you could say that there were weaknesses in British Agriculture. There was still a great deal of conservatism in farming, large amounts of investments were often had a poor return, and there was still insecurity of tenure for tenant farmers. There were other factors, arguably more important than free trade, for the varying fortunes in both British industry and agriculture. Large increase in population meant demand rose substantially, the railway boom stimulated jobs, provided more money for citizens, helped technical developments in steel and iron industry and enabled farmers to sell in new markets. Therefore, the validity of this view is weak, as there are many more factors contributing the varying fortunes of industry and agriculture. ?? ?? ?? ?? Sam Nurding 13RAC Mr Tillet 18th November 2006 ...read more.