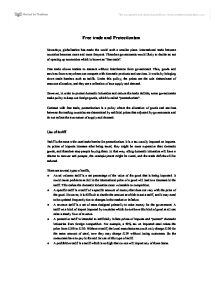 Free trade and Protectionism Nowadays, globalisation has made the world such a smaller place. International trade between countries becomes more and more frequent. Therefore governments would likely to decide an act of opening up economies which is known as "free trade". Free trade allows traders to transact without interference from government. Thus, goods and services from everywhere can compete with domestic products and services. It works by bringing down trade barriers such as tariffs. Under this policy, the prices are the sole determinant of resource allocation, and they are a reflection of true supply and demand. However, in order to protect domestic industries and reduce the trade deficits, some governments make policy to keep out foreign goods, which is called "protectionism". Contrast with free trade, protectionism is a policy where the allocation of goods and services between the trading countries are determined by artificial prices that adjusted by governments and do not reflect the true nature of supply and demand. Use of tariff Tariff is the most wide used trade barrier for protectionism. It is a tax usually imposed on imports. As prices of imports increase after being taxed, they might be more expensive than domestic goods, and therefore stop people buying them. In that way, ailing domestic industries will have a chance to recover and prosper, the unemployment might be cured, and the trade deficits will be reduced. ...read more.

It implies that the domestic price rises by less than the tariff. Therefore, since the price increase is smaller, both the loss to consumers and the gains by producers are reduced, whereas the tariff revenue is not reduced. The societal loss of the tariff in these cases can therefore be positive. If a tariff is set as a prohibitive tariff, it need only be as large as the difference between its equilibrium price (the intersection of the demand and supply curves) and the world price. In this case, it is the same that consumers lose and producers gain. However, there is no tariff revenue as imports are zero, and as a result the net loss to society caused by the prohibitive tariff is maximized. Non-tariff methods Subsidies can also be regarded as a form of trade barrier by making domestic goods and services artificially competitive against imports, and they are expected to protect local jobs. When a subsidy is applied to an industry, the supply curve will shift to the right because the cost of production is made lower, hence lower the prices of the goods and encourage consumers to purchase more rather than buying imports. From the diagram, we can find that the introduction of a subsidy is good for both consumers and producers, since both the consumer surplus and the total revenue the producers gain increase. ...read more.

It does not only restrict consumers' choices, but also contribute greatly to both the cost of consumption and the cost of production. For instance, Japanese consumers pay five times the world price for rice because of import restrictions protecting Japanese farmers. European consumers pay dearly for EC restrictions on food imports and heavy taxes for domestic farm subsidies. Furthermore, protectionism that reduces consumer spending will actually end up destroying jobs. Since the demand for products decrease, firms are going to produce less and therefore cut labour. As I mentioned before, if a country impose trade barriers to restrict imports from other countries, those countries might also do this in retaliation. Hence, a trade war may be created. For example, The US Semiconductor Trade Pact, which pressured Japanese producers to cut back production of computer memory chips, caused a serious worldwide shortage of these widely used parts. Companies which use these components in the production of electronic consumer goods, in various countries around the world, were badly hurt. As a resort of trade wars, the economy growth of the whole world will slow down. However, nearly all mainstream economists are supporters of free trade. This is because the gains from free trade outweigh any losses. As free trade allows countries to specialise in the production of goods and services in which they have a comparative advantage, both consumers and producers will get benefits. And more jobs will be created in a competitive market. ?? ?? ?? ?? ...read more.