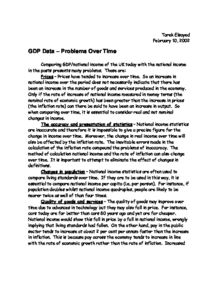 For instance, if population doubles whilst national income quadruples, people are likely to be nearer twice as well of than four times. Quality of goods and services - The quality of goods may improve over time due to advances in technology but they may also fall in price. For instance, cars today are far better than cars 80 years ago and yet are far cheaper. National income would show this fall in price by a fall in national income, wrongly implying that living standards had fallen. On the other hand, pay in the public sector tends to increase at about 2 per cent per annum faster than the increase in inflation. This is because pay across the economy tends to increase in line with the rate of economic growth rather than the rate of inflation. ...read more.