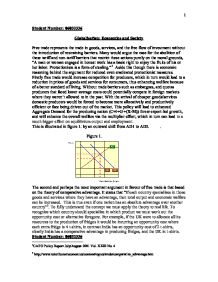 Student Number: 06032336 Globalisation: Economics and Society Free trade represents the trade in goods, services, and the free flow of investment without the introduction of restraining barriers. Many would argue the case for the abolition of these tariff and non-tariff barriers that restrict these actions purely on the moral grounds, "A man or woman engaged in honest work has a basic right to enjoy the fruits of his or her labor. Protectionism is a form of stealing."1 Aside this though there is economic reasoning behind the argument for reduced even eradicated protectionist measures. Firstly free trade would increase competition for producers, which in turn would lead to a reduction in prices of goods and services for consumers, thus enhancing welfare because of a better standard of living. Without trade barriers such as embargoes, and quotas producers that faced lower average costs could potentially compete in foreign markets where they weren't allowed to in the past. With the arrival of cheaper goods/services domestic producers would be forced to become more allocatively and productively efficient or face being driven out of the market. This policy will lead to enhanced Aggregate Demand for the producing nation (C+I+G +(X-M)) threw export-led growth, and will enhance the overall welfare via the multiplier effect, which in turn can lead to a much bigger effect on equilibrium output and employment. This is illustrated in figure 1. by an outward shift from AD1 to AD2. . ...read more.

Whilst this illustrates how trade barriers act against the interest of welfare, it could be argued that if the revenue earned by the government outweighed that net welfare loss, and was redistributed domestically, there wouldn't be much welfare loss incurred. However whilst free trade has its benefits and there is clearly an argument for the abolition of protectionist measures, tariff and non-tariff barriers still exist, and this is based on a number of issues. Firstly many countries express the need for import controls based on the infant industry argument. Those industries that have just started up and have yet to experience economies of scales that an incumbent firm would, arguably must be protected from the competition it would experience under a completely free trade policy. This short-term protectionist measure allows the industry to develop it comparative advantage and once established the barriers will be removed and international free trade will resume without fear of the industry being driven out. This policy however is dangerous as there is a risk that if the infant industry isn't exploited to foreign competition then it will fail in becoming fully efficient. Student Number: 06032336 A second argument in favour of protectionist measures and a reason why trade barriers still exist today is to prevent what is called "dumping". "Dumping" refers to the selling of goods in the short-term at a below average price, which initially benefits consumers and increases welfare. ...read more.

This concept of the "technique effect"4 realises that the environmental harm caused will be abated by the increases in income that will call for cleaner production methods. As I already mentioned before increased global trade also allows for developing of technology that could in the long run also help combat environmental problems associated with increased trade. In contrast though, many would argue that there are some irreversible environmental problems. Pollution, fishing, deforestation can cause irreversible damage to natural resources that will eventually see growth non-sustainable. Because trade implies the movement of goods internationally, you would be right to assume then that this would lead to increased burning of fuels, however this isn't the case and this argument is generally over exaggerated. It has been proved that domestic trade is a greater energy drainer than that of trade on an international level. For example nowadays deforestation is generally a result of over populating an area, not the typically assumed energy resource, due to the development of other energy resources. In conclusion whilst the idea of free trade being the driving force behind much of the global environmental problems we witness today I believe, in the long-run, if applied with well managed government policy, the environment doesn't have to suffer. The period of polluting transition that is inevitable, I believe is well worth the trouble in return for the increased growth, welfare, and improved living standards, especially when we consider the number of people that live in extreme poverty in this day and age. ...read more.