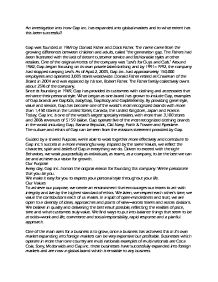 An investigation into how Gap inc. has expanded into global markets and to what extent has this been successful? Gap was founded in 1969 by Donald Fisher and Doris Fisher. The name came from the growing differences between children and adults, called "the generation gap. The Fishers had been frustrated with the lack of decent customer service and fashionable styles at other retailers. One of the original mottos of the company was "Levi's for Guys and Gals." Around 1982, Gap began focusing on its own private label clothing and by 1991-1992, the company had stopped carrying Levi's. As of April 2, 2005, Gap Inc. had approximately 150,000 employees and operated 3,005 stores worldwide. Donald Fisher retired as Chairman of the Board in 2004 and was replaced by his son, Robert Fisher. The Fisher family collectively owns about 25% of the company. Since its founding in 1969, Gap has provided its customers with clothing and accessories that enhance their personal style. What began as one brand has grown to include Gap, examples of Gap brands are GapKids, babyGap, GapBody and GapMaternity. By providing great style, value and service, Gap has become one of the world's most recognized brands with more than 1,450 stores in the United States, Canada, the United Kingdom, Japan and France. Today, Gap Inc. is one of the world's largest specialty retailers, with more than 3,100 stores and 2006 revenues of $15.9 billion. Gap operate five of the most recognized clothing brands in the world including Gap, Banana Republic, Old Navy, Forth & Towne and Piperlime. The culture and ethics of Gap can be seen from the missions statement provided by Gap. Guided by a shared Purpose, we're able to work together more effectively and contribute to Gap Inc.'s success in a more meaningful way. Inspired by the same Values, we reflect the character, spirit and beliefs of Gap in everything we do. ...read more.

The company will be provided with a lump sum and a percentage share of the annual turnover. This lump sum can be invested into other areas of the business such as advertising or research and development. The percentage of the annual turnover could also be retained profit. The business grows quickly and easily a global brand can be created effectively as long as people are willing to buy franchises in your business. Although there are various advantages the company could benefit from there are also disadvantages which could harm the business, actions by the franchised stores could harm the reputation of the company, because they have no control in the market they give full responsibility to the franchisee that could let you down. Also only some of profits are given to the company they have to share with the franchisee. This annual turnover they do receive would probably be significantly lower than the stores gross profit annually. The final growth strategy which could be used by Gap would be licensing, A license allows a business to make, produce and market a product or use the production method, which is protected by copyright or patent. This means that an innovative company can expand into international markets without actually having to invest in locally based production facilities. An example of licensing would be Heineken lager which is brewed under license by Whitbread's in the United Kingdom. From research I have found that as well as franchising Gap have also entered licensing agreements. In 2006 Gap announced a licensing agreement between themselves and Safilo group. Safilo group are the leader in high-end and luxury eyewear. The agreement includes Banana Republic-branded prescription frames and sunglasses. The agreement includes the design, development, production and distribution of a collection to be launched by the end of 2007 in the United States and Canada. Terms of the agreement include a five-year commitment. ...read more.

I believe that the franchising agreements set up with both groups in the Middle East is a positive move for Gap. I think the area knowledge that the groups will bring will help Gap succeed in this market were it failed in the European market. Using the Zara case study I found that there previous franchises have been extremely successful and increased profits massively for the parent company Inditex. Gap needs to seriously consider how and why Zara's franchise agreements have worked and why they have been successful and then implement this into there own agreements. Gap and the franchisee groups could benefit from the agreements massively for a number of reasons, any risk for the business is taken away as someone else will be running the business. A lump sum is received for the franchise and more importantly high capital costs will not be needed because someone else would have to invest the money. This makes this a positive because there are less opportunity costs as less money would have to invested into selling abroad. This money could be used to strengthen the foothold in the company's domestic market as they cannot afford to neglect this whilst trying to expand. However there are also negatives of this strategy which Gap would have to consider mainly that Gap would not have any control over the franchised stores, the owner could tarnish the reputation of the company on a global scale through one action which would drastically affect the company. Gap would have to ensure the franchisee was the right person for the culture and ethics in the company and a partnership built on trust must be formed. Overall I think that franchising would be an excellent way of growing for Gap. I believe looking at the success of Zara using this strategy that Gap will succeed in the Middle East with the franchised agreements. Gap must be careful however that the Al Tayer Group and F J Benjamin are the right groups to push the Gap brand globally. ...read more.