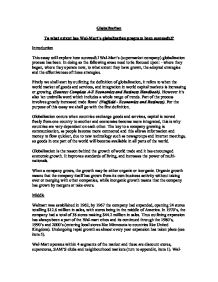 Globalization To what extent has Wal-Mart's globalization program been successful? Introduction This essay will explore how successful Wal-Mart's (supermarket company) globalization process has been. In doing so the following areas need to be focused upon: - where they began, where they operate now, to what extent they have grown, the adopted strategies and the effectiveness of those strategies. Firstly we shall start by outlining the definition of globalization, it refers to when the world market of goods and services, and integration in world capital markets is increasing or growing. (Source: Complete A-Z Economics and Business Handbook). However it's also 'an umbrella word which includes a whole range of trends. Part of the process involves greatly increased trade flows' (Nuffield - Economics and Business). For the purpose of this essay we shall go with the first definition. Globalization occurs when countries exchange goods and services, capital is moved freely from one country to another and economies become more integrated, this is why countries are very dependant on each other. The key to a company growing is communication, as people become more connected and this allows information and money to flow quicker, due to new technology such as newsgroups and internet meetings, so goods in one part of the world will become available in all parts of the world. Globalization is the reason behind the growth of world trade and it has encouraged economic growth. ...read more.

We must now look to how affective the adopted strategies are: Walmart's growth has lead to an increased number of jobs amongst the worlds most biggest and powerful countries, offering these has favoured them also as they have more employees within their stores (meaning customers are seen to much quicker) they are also local (which means they are able to communicate with customers better) and not just this but their reputation for being a big company and solid provider of goods is improved. Wal-Mart has experienced globalization in a number of ways. In 1991, Wal-Mart had opened their first international store, this has grown to more than 1,500 stores in nine countries. Additionally, the company also owns 37.8% interest in Seiyu Ltd (a leading Japanese retailer). Wal-Marts acquisitions have been a key to their growth, such as taking over Asda in the United Kingdom in 1999, below shows the turnover and operating profit from 2000 to 2003 of Wal-Mart in the UK: Date of Accounts 31/12/2003 31/12/2002 31/12/2001 06/01/2001 07/01/2000 1 Turnover 13,325,700 12,188,000 10,731,900 9,744,600 4,395,000 2 Operating Profit 650,400 605,300 497,000 502,800 100,500 Operating profit is what is left over from the sales revenue after operating costs are deducted. There is an increase in both the turnover and operating profit, this indicates that growth is occurring in this Wal-Mart store. 'Owned by Wal-Mart Stores, the biggest company in the world by value, ASDA is the second biggest supermarket chain in the UK with 17% of the market share.' ...read more.

If Walmart grows too much it could cause diseconomies of scale. Additionally, when Walmart acquired Asda they had to adapt to their culture. All in all the advantages out weigh the disadvantages. For Wal-Mart to further their growth, they should implement the following: * Wal-Mart competes with giant supermarkets, however consumers don't always go to the supermarket, but instead their local convenience store. Therefore they should look to franchising their own convenience stores because they have a strong reputation of a market leader. Which in turn means franchisors will look to their name ahead of companies such as Londis, One-stop, or Jacksons. * Wal-Mart has a real competitive advantage within their core business. This gives them the advantage of investing in places with rapid growth. E.g. LEDC's that are experiencing vast economic growth. * Uphold their strong reputation through their constant advertising and willingness to offer a quality of service. Conclusion In conclusion Wal-Mart's successes have come with their ability to acquire businesses fast. They have been successful to the extent that there is nothing stopping them from going forward. The company is a prime example of inorganic growth due to the rapid competitive advantage they gained in the US. Which has been achieved by taking over businesses that require no start-up costs and are successful within their economy. In doing so, it's meant that they've gained total control, giving them the power to make all decisions for what happens to those businesses. ?? ?? ?? ?? ...read more.