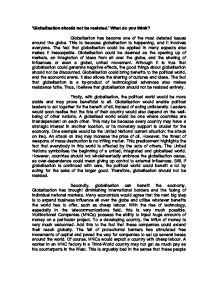 'Globalisation should not be resisted.' What do you think?

In order to withstand the test of globalisation, it should not oppose it, but find a new place in society. I believe ideas to resist globalisation in order to preserve our cultural heritage cannot stand. However, I also believe that it is up to the people to preserve and adapt their culture in a new environment, instead of being sanguine about it. Proper measures have to be initiated, for instance promoting Chinese New Year for the Chinese or Hari Raya Aidiladha for the Muslims. In this sense, globalisation should be given resistance only to buy time for people to prepare their culture to face the onslaught of globalisation. Furthermore, globalisation may induce democracy where it is practiced. Nations governing democratically have laws that respect the people's rights, opinions and freedom. Globalisation is, in effect a practice of democracy free trade and freedom. Countries led by dictators are the least open and have the least freedom. These countries, like Sudan, Zimbabwe, Liberia, Cuba and so on, are also the most hostile to globalisation, openness and trade in goods and services. And for good reason - these dictators or those with authoritarian power fear that their power may be undermined as the people begin to realise and long for the freedom of democracy. ...read more.

Thus, in desperation, forests and wildlife sanctuaries would have to be sacrificed to allocate the ever-growing numbers of people. Space will then be at a premium. However, it will be the large companies and the rich that will benefit as they have the money and model to invest and buy land for their purposes. This then leaves no room for the poor, who would consequently remain so as they cannot compete with those with larger amounts of money. Thus, the abuse of globalisation may benefit only the rich and not the poor. It is true that globalisation has its negative effects. However, if integrated with care, it may well prove to be a boon instead of a bane. Globalisation can benefit nations politically, economically and culturally. Ideas of resistance would ring a nation nowhere, as globalisation is needed for a nation to compete at the international stage. Globalisation could lead to the triumph of democracy over autocracy. In the end, it is happening now, if not already. The large scope that globalisation encompasses makes it an unevitable process. What is ironic is that while protesters fight against globalistion efforts in the name of Africans and the world's poor, Africans themselves may well want it to go their way. Thus, I strongly believe that globalisation should not be resisted, but should be embraced as its advantages outweigh the disadvantages. ...read more.