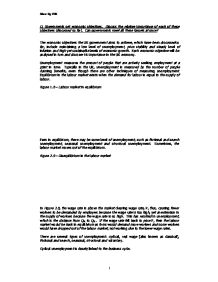 Q. Governments set economic objectives. Discuss the relative importance of each of these objectives (discussed so far). Can governments meet all these targets at once? The economic objectives the UK government aims to achieve, which have been discussed so far, include maintaining a low level of unemployment, price stability and steady level of inflation and high yet sustainable levels of economic growth. Each economic objective will be analysed in turn and discover its importance in the UK economy. Unemployment measures the amount of people that are actively seeking employment at a point in time. Typically in the UK, unemployment is measured by the number of people claiming benefits, even though there are other techniques of measuring unemployment. Equilibrium in the labour market exists when the demand for labour is equal to the supply of labour. Figure 1.0 - Labour market in equilibrium Even in equilibrium, there may be some level of unemployment, such as frictional and search unemployment, seasonal unemployment and structural unemployment. Sometimes, the labour market moves out of the equilibrium. Figure 2.0 - Disequilibrium in the labour market In Figure 2.0, the wage rate is above the market clearing wage rate, P, thus, causing fewer workers to be demanded by employers because the wage rate is too high, yet an extension in the supply of workers because the wage rate is so high. This has resulted in unemployment, which is the distance from QD1 to QS1. If the wage rate fell back to price P, then the labour market would be back in equilibrium as firms would demand more workers and some workers would have dropped out of the labour market, not working due to the lower wage rates. There are several types of unemployment: cyclical, real wage [also known as classical], frictional and search, seasonal, structural and voluntary. Cyclical unemployment is closely linked to the business cycle. Figure 3.0 - The business cycle There are four parts to the business cycle: the boom/peak, recession, slump and recovery/expansion. ...read more.

In the late 1980s, the Conservative government used the Monetarist view of controlling inflation. It did lead to a fall in inflation, however, it lead to a fall in output and employment and thus not favourable to people. Inflation occurs because increases in the money supply are over and above the real rate of growth in the economy - see Figure 9.0 overleaf. Figure 9.0 - Increase in aggregate demand leading to an increase in the price level The government imposes tight monetary policy. A restrictive monetary policy means that there will be a fall in the supply of money relative to the demand for money. They will try to increase the amount of money they hold by selling non-monetary assets or by borrowing money. This increase demand for funds will lead to interest rates rising, which reduces consumption and investment. The imposition of a tight monetary policy means that money supply is now less than the demand for money. Figure 10.0 - Liquidity preference [demand for money] after imposition of monetary policy The fall in demand for money has now caused consumption and investment expenditure to fall. The restrictive monetary policy leads to a fall in aggregate demand, therefore reducing inflation. The demand for money now equals the supply of money. Figure 11.0 - Fall in aggregate demand after imposition of monetary policy Monetarists argue that controlling inflation is relatively simple to do, however governments prefer not to use this method as it can cause unemployment and low growth, thus not good for the political party to gain votes. Keynesians argue that controlling the money supply is not always the best method of controlling inflation as they argue that there is no precise relationship between the money supply and inflation. Tight monetary policy can also lead to increased inflation in the short run [raising interest rates will lead to higher mortgage repayments, therefore inflationary]. ...read more.

In other words, they want continual, reasonable growth that never ignites inflation, perhaps 2.5% - 3% per annum. Notice that the growth rate has been over 2% without getting out of hand for six years. Following the 'bust/boom/bust' of the 'early 80s/late 80s/early 90s', this is quite an achievement. Inflation has also been remarkably subdued by historical standards. Following the horribly inflationary 1970s [peaked at 25%] and the near 10% figure ten years ago, RPIX has been growing at 3% per annum or less for six years. The goal of full employment has effectively been consigned to the history books. Unemployment reached one million in the 1980s for the first time since the 1930s, and then proceeded to reach 3 million [or 4 million, depending on the definition] within three years. Having said that, 'full employment' does not mean that everyone has a job. Even in the 'full employment' era of the 1950s there were still 300,000 unemployed. Today's figure is falling towards one million which some consider to be fairly close to full employment given the large amount of structural unemployment. This fall has been possible due to supply-side reforms of the Conservative governments of the 1980s and the increased flexibility of the UK labour market, both of which have reduced the number of structurally unemployed people. If one had to pick the most important objective today, it would have to be inflation. Although it should be growth, all government's efforts are devoted to the control of inflation. If this goal is missed, it is felt the goal of higher growth will not be attainable either. However, "prevention is better than cure". Inflation is cumulative: that is, say inflation for January 2002 was 1.8% and by September 2002 it was 1.6%, this does not mean that prices have fallen. It means that prices are simply not rising as quickly as they were compared to January 2002. It would require deflationary measures to lower the price level. The government can only stop prices rising so quickly, but preventing them rising so rapidly is what the government is aiming for. Alison Ng 13JK 1 ...read more.