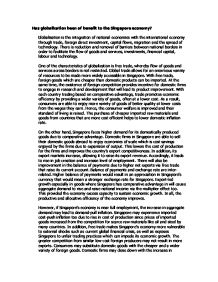 Has globalization been of benefit to the Singapore economy?

Has globalization been of benefit to the Singapore economy? Globalisation is the integration of national economies with the international economy through trade, foreign direct investment, capital flows, migration and the spread of technology. There is reduction and removal of barriers between national borders in order to facilitate the flow of goods and services, investments, financial capital, labour and technology. One of the characteristics of globalization is free trade, whereby flow of goods and services across borders is not restricted. Global trade allows for an enormous variety of resources to be made more widely accessible in Singapore. With free trade, foreign goods which are cheaper than domestic products can be imported. At the same time, the existence of foreign competition provides incentive for domestic firms to engage in research and development that will lead to product improvement. With each country trading based on comparative advantage, trade promotes economic efficiency by providing a wider variety of goods, often at a lower cost. As a result, consumers are able to enjoy more variety of goods of better quality at lower costs from the wages they earn. Hence, the consumer welfare is improved and their standard of living is raised. ...read more.

This helps to reduce inflation rate. The exchange of technology and ideas improve innovation and raises the level and quality of technology. Being more productive efficient with better technology and ideas, productive efficiency is promoted, therefore cost of production is lowered. Potential growth is hence being stimulated. However, technology often causes negative externalities such as pollution from increased air and sea freight transport. The carbon footprint of Singapore will increase. There may be possible increased pollution from increase in production due to the need to increase provision of increasingly sophisticated entertainment, recreational and social activities to satisfy the needs of a more cosmopolitan labour force. Pollution due to higher levels of industrial pollution, clearing of land for production facilities, discharge of toxic wastes into environment have affected Singaporean's standard of living. Singapore's rapid growth may be attributed, to a large extent, to relatively free trade, free capital flows, free movement of labour and exchange of technology and ideas. Globalisation actually provides more opportunities than threats, just that it requires governments to adopt appropriate policies to mediate the adverse impacts of globalization such as structural unemployment due to the restructuring of the economy and mergers of firms. In the case of Singapore, the government consistently restructures the economy to cope with the challenges of globalization. In all, globalization has been of benefit to the Singapore economy. ...read more.