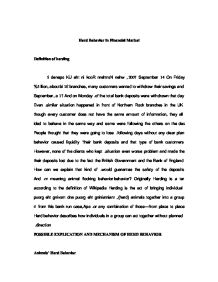 Herd Behavior in Financial Market Definition of herding On Friday 14 September 2007, when Northern Rock in the UK opened it branches, many customers wanted to withdraw their savings and �1 billion, about 5% of the total bank deposits were withdrawn that day. And on Monday 17 September, a similar situation happened in front of Northern Rock branches in the UK. Even though every customer does not have the same amount of information, they all decided to behave in the same way and some were following the others on the following days without any clear plan. People thought that they were going to lose their bank deposits and that type of bank customers' behavior caused liquidity problem and made the situation even worse. However, none of the clients who kept their deposits lost due to the fact the British Government and the Bank of England would guarantee the safety of the deposits. How can we explain that kind of behavior? Originally Herding is a term meaning animal flocking behavior. And according to the definition of Wikipedia Herding is the act of bringing individual animals together into a group (herd), maintaining the group and moving the group from place to place-or any combination of those. Apart from this bank run case, Herd behavior describes how individuals in a group can act together without planned direction. POSSIBLE EXPLICATION AND MECHANISM OF HERD BEHAVIOR Animals' Herd Behavior According to evolutionary biologist W. D. Hamilton's theory animals are forming a group to reduce the danger of being hunted by predictors. ...read more.

Therefore, I will do as they do'. Examples of Herding Behavior Bank runs: depositors running on banks when they observe other depositors doing so. More specifically, First; investors can observe in long run when others are running on banks. Second, forcing long-term projects to liquidate early possibly leads to shortfall of funds. From the payoff externalities model's view, people are withdrawing their deposits because they feel like they are losing their money if they keep their money on the bank account. And from informational cascade model's view, some people may think they are not going to lose their money on their bank account but they are following the others because they think they are not wise enough and others are withdrawing their money. In real case, Argentina experienced such a run in the last two days of November 2001, with total deposits in the banking system falling by more than 2 billion (US) dollars, or nearly 3 percent, on the second day of the run alone.1 Such runs were a common occurrence in the United States in the late nineteenth and early twentieth centuries and have also occurred in recent times in several developing countries, including Brazil in 1990 and Ecuador in 1999. Asian crisis of 97-98, herding and speculation infection The Asian crisis of 1997-98 that led to a regional economic fall in East Asia can be traced to overexpansion and under-regulation. The center of the Asian crisis was Thailand's careless macroeconomic management that featured a fraudulent financial sector. ...read more.

was a speculative which had its climax on March 10, 2000, with the NASDAQ hitting up to 5132.52 but closing at 5048.62 in the same day. During the dot-com bubble period mostly the developed countries experienced the growth in the Internet sector and related fields. Companies such as Cisco Systems, Dell, Intel, and Microsoft were the dominant player of NASDAQ. And related to the Internet business a group of new Internet-based companies commonly referred to as dot-coms were founded. Just because of the fact that Companies had a name with an "e-" prefix to their name and a ".com" the stock price was going up. Investors were overly confident of their future profits due to the advancement of technology and individual speculation while they overlooked traditional stock market value until the bubble was collapsed. Conclusion As we can see massive herding behavior turned out to be a cause of crisis at the end, and herd behavior is seen as something very negative to the market. As we have seen bank runs, bubbles, and several forms of crises. However, we cannot prevent from herding because it is a sort of instinct and it is closely related to psychological factors. Partially, individuals can make profit of their herding behavior as they are following famous investors such as Warren Buffet but the fact is that no investor can really avoid bubbles and forecast the coming crises. What we have to remember is the financial market is a complex of rational and irrational behavior and we can barely categorize them before the disaster happens. We have to be prepared of the consequence the herd behavior and be rational when the irrationality happens. ...read more.