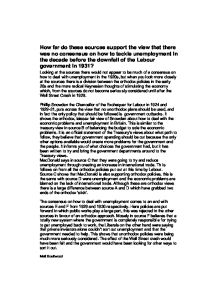 How far do these sources support the view that there was no consensus on how to tackle unemployment in the decade before the downfall of the Labour government in 1931?

How far do these sources support the view that there was no consensus on how to tackle unemployment in the decade before the downfall of the Labour government in 1931? Looking at the sources there would not appear to be much of a consensus on how to deal with unemployment in the 1920s, but when you look more closely at the sources there is a division between the orthodox policies in the early 20s and the more radical Keynesian thoughts of stimulating the economy which, from the sources do not become seriously considered until after the Wall Street Crash in 1929. Phillip Snowden the Chancellor of the Exchequer for Labour in 1924 and 1929-31, puts across the view that no unorthodox plans should be used, and in fact the only policy that should be followed is government cutbacks. ...read more.

MacDonald says in source C that they were going to try and reduce unemployment through creating an increase in international trade. This follows on from all the orthodox policies put out at this time by Labour. Source C shows that MacDonald is also supporting orthodox policies, this is the same with source D were unemployment and the economic problems are blamed on the lack of international trade. Although these are orthodox views there is a large difference between source A and D which have grabbed two ends of the orthodox 'stick'. The consensus on how to deal with unemployment comes to an end with sources E and F from 1929 and 1930 respectively. ...read more.

opposing the Labour ones coming from after the Wall street crash so we cannot tell if they had differing views before then. The Conservatives are not even mentioned so we must assume that they continued with their traditional policies throughout this period, and so would support the claim of consensus. The sources show that there was a certain amount of consensus on how to deal with unemployment but this changed before 1929 when orthodox policies were looked appon less favourably and new schemes were being tried. It in 1929 when the wall street crash caused the world economic depression, this probably meant that more unorthodox views were looked for to try and restore the economy and reduce unemployment. ?? ?? ?? ?? Matt Boultwood ...read more.