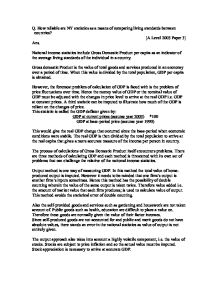 How reliable are National income statistics as a means of comparing living standards between countries?

Q. How reliable are NY statistics as a means of comparing living standards between countries? [A Level 2003 Paper 3] Ans. National income statistics include Gross Domestic Product per capita as an indicator of the average living standards of the individual in a country. Gross domestic Product is the value of total goods and services produced in an economy over a period of time. When this value is divided by the total population, GDP per capita is obtained. However, the foremost problem of calculation of GDP is faced with is the problem of price fluctuations over time. Hence the money value of GDP or the nominal value of GDP must be adjusted with the changes in price level to arrive at the real GDP i.e. GDP at constant prices. A third statistic can be imputed to illustrate how much of the GDP is reliant on the changes of price. This statistic is called the GDP deflater given by: GDP at current prices (assume year 2003) *100 GDP at base-period price (assume year 1990) This would give the real GDP change that occurred since the base-period when economic conditions were stabile. The real GDP is then divided by the total population to arrive at the real capita that gives a more accurate measure of the income per person in country. The process of calculations of Gross Domestic Product itself encounters problems. ...read more.

The value of exports must be added while imported finished goods and raw materials should be deducted. Adjustment to measurements of GDP may enable national statistics to be more reliable. However output values also include the incomes that flow out of the country and incomes that flow into the country. Hence Gross National Product is another statistic that sometimes replaces GDP as the norm of calculating national income. This is because GNP takes into account the income the permanent residents of the country earn irrespective of their geographical location. Another improvement to measurement of national income is Net National Product that is found by deducing depreciation or capital consumption of the economy from the GNP value. Over time though GDP or the other measures prove to be unreliable due to some factors which the GDP value cannot reflect. For example leisure activities are an important aspect for higher standards of living but GDP does not include this. However the extent of leisure as a component of living standard can vary between countries. For example Japan has a higher GDP per capita and the people have longer hours of working so lesser leisure time but they do not consider this as a field in their standards of living. However an average person in UK would consider less leisure time in favour of long working hours as a fall in his living standards. ...read more.

Therefore living standard cannot be compared. Externalities such as pollution affect living standards but pollution can neither be given an absolute value nor can it be given in a discrete way. It is hard to figure to what extent economics are affected by pollution and hence the people's are living standards cannot be entirely given. Social indicators are also important in measuring standard of living. Crime rates, social protection and security, human rights, political stability, religious tolerance are important factors in measuring living standards. Income per person may be high or moderate in a country but unless these features are not present on average person is barely better-off. Foreigners' status in different countries is important and must be accounted for to estimate living standards. For example, in France it is illegal to carry out statistics on the ways of living of foreign immigrants. Therefore the statistics on living standards become weak as the real condition and of problems these people are unknown and cannot be improved effectively. It is also that income disparity and living standards vary largely between different ethnic groups and immigrants of a country. For example, in Zurich it was found that British, America and European residents get a much higher income than the Swiss average whereas migrants from Somalia, Eastern Europe and Bangladesh earn much lower than the Swiss average and live in congested areas. These situations make comparisons of living standards between countries difficult. Due to the existence of different cultures, locations, extent of black economy, national income accounting conventions, needs and price levels comparison between countries become unreliable. ...read more.