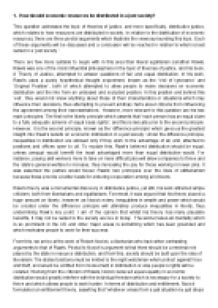 How should economic resources be distributed in a just society?

Transfer-Encoding: chunked ﻿1. How should economic resources be distributed in a just society? This question addresses the topic of theories of justice, and more specifically, distributive justice, which relates to how resources are distributed in society. In relation to the distribution of economic resources, there are three pivotal arguments which illustrate the views surrounding this topic. Each of these arguments will be discussed and a conclusion will be reached in relation to which is best suited in a ?just society.? There are few more suitable to begin with in this area than liberal egalitarian Jonathon Rawls. Rawls was one of the most influential philosophers in the topic of theories of justice, and his book, A Theory of Justice, attempted to answer questions of fair and equal distribution. In his work, Rawl?s uses a purely hypothetical thought experiment, known as the ?Veil of Ignorance? and ?Original Position?, both of which attempted to allow people to make decisions on economic distribution and the like from an unbiased and excluded position. In this position and behind this ?veil?, they would not know anything about those of their characteristics or situations which may influence their decisions, thus attempting to prevent arbitrary facts about citizens from influencing the agreement among their representatives. ...read more.

From this, we arrive at the work of Robert Nozick, a libertarian who had rather contrasting arguments to that of Rawls. Pivotal to Nozick?s argument is that there should be a minimal role played by the state in resource distribution, and from this, society should be built upon the idea of liberalism. The states functions must be limited to the night watchman which protect against force and theft, and would be omitted from involvement in distribution or else people?s rights will be violated. Working from the criticism of Rawls, Nozick believed equal equality in economic distribution would greatly interfere with the individual freedom which is necessary for a society to thrive and which allows people to work harder. In terms of distribution and entitlement, Nozick formulated an entitlement theory, asserting that ?whatever arises from a just situation by just steps is just itself?. This included justice in acquisition (how you come by it), justice in transfer (how property is transferred) and lastly, rectification of injustice. On the whole, for Nozick, whether distribution is considered just or not depends on how it came about. However, resultant of this belief, Nozick?s theory could potentially justify very unequal economic distributions that may not respect what people deserve nor help those most disadvantaged. ...read more.

All in all, the right action for UT is understood entirely in terms of consequences produced (consequentialism). The notion of maximising welfare involves trading off the benefits accruing to some against the harms accruing to others, and deciding upon the course of action that produces the largest net benefit. Thus, as long as UT?s maximise gross domestic profit, it does not matter who has what. It can be unfairly distributed. This demonstrates that utilitarianism is not concerned with the question of how welfare is distributed, but how much welfare there is in total. To conclude, each of these theories posits a contrasting idea in how economic resources should be distributed. Interestingly, for some reason or another, each of the theories will allow unequal distribution. However, I believe Rawl?s logic behind allowing this unequal distribution carries the most weight for a just society. In contrast to Nozick, Rawl?s difference principle will ensure that unequal distribution will be allowed if it benefits the least advantaged, and Rawl?s allows the state to have watch over this. Nozick?s theory on distribution places too much emphasis on liberalism and the ?every man for himself? attitude at the expense of a lack of fairness and equality. Utilitarianism also has plausible arguments; however, it could potentially justify discrimination of minorities in distribution in order to achieve the ?greatest happiness?. ...read more.