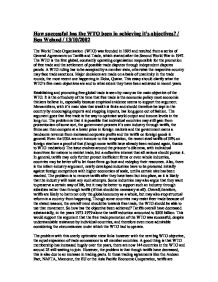 How successful has the WTO been in achieving it&amp;#146;s objectives?

How successful has the WTO been in achieving it's objectives? / Ben Weland / 13/10/2002 The World Trade Organisation (WTO) was founded in 1995 and resulted from a series of General Agreements on Tariffs and Trade, which started after the Second World War in 1947. The WTO is the first global, constantly operating organisation responsible for the promotion of free trade and the settlement of possible trade disputes through independent disputes panels. A WTO ruling has to be accepted by a member state, otherwise the respective country may face trade sanctions. Major decisions are made on a basis of unanimity in the trade rounds, the most recent one happening in Doha, Quatar. This essay should clarify what the WTO's five main objectives are and to what extent they have been achieved in recent years. Establishing and promoting free global trade is seen by many as the main objective of the WTO. It is the orthodoxy of the time that free trade is the economic policy most economic thinkers believe in, especially because empirical evidence seems to support the argument. Mercantilism, with it's main idea that wealth is finite and should therefore be kept in the country by encouraging exports and stopping imports, has long gone out of fashion. ...read more.

Now, as soon as there is a trading conflict between two blocks, it may directly affect dozens of countries instead of only two, therefore negatives effects are likely to be exacerbated. On the other hand, the pressure to avoid trade wars has increased, as politicians try to avoid these potentially more harming wars at all cost. Therefore, in conclusion, the WTO has not yet reached the objective of equal expansion of trade concessions to all countries, as concessions now mainly happen within the major trading blocks. However, it could save administrative cost if the WTO managed to convince a whole block to lower it's tariffs to the outside world, but the problem is that individual countries still retain a lot of independence within a trading area, therefore the theoretical block acting may actually not happen in reality. However, if a block is as strongly linked as for instance the EU, it may be difficult for a single country to make independent decisions. In conclusion, this objective is far from fulfilled, especially developing countries outside major trading blocks are discriminated against. The issue of developing economies is a crucial one in the WTO anyway. Another objective, making trade fair by establishing rules which count for everyone is especially related to that. ...read more.

Though the environment may be one of the WTO's objectives, it is clear that the focus lies elsewhere, therefore it cannot be counted for or against the WTO's achievements so far, as not enough data is available on that issue. In conclusion, the WTO has been fairly successful in achieving it's main objective, the promotion of free trade, as the current popularity of the WTO shows (many countries want to join). However, though a lot has been achieved, the fight for free trade is far from over. Developing economies complained that subsidies and tariffs were not reduced enough in the Uruguay round, whilst that was demanded from them. There is still the danger of exploitation of developing countries, this has to be prevented. Also, there is the danger of complacency, as much has been achieved, politicians do not see the need for further reductions or they fear employment losses, therefore there are already signs of some reversal of tariff reduction policies (the USA has just passed a farm bill supporting it's farmers, though still within WTO regulations a harming measure to free trade). The WTO must not stop it's reforms, a lot of problems for the developing countries result from high tariffs, only if tariffs and subsidies are reduced everywhere in the world, not only within trading blocks, can the WTO's objectives be considered as sufficiently fulfilled. Ben Weland ...read more.

*****
This is an excellent analysis of the work of the WTO and evaluation of its success. The writer uses many relevant examples to support their point and the essay is well structured.