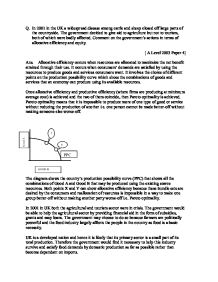 In 2001 in the UK a widespread disease among cattle and sheep closed off large parts of the countryside. The government decided to give aid to agriculture but not to tourism, both of which were badly affected. Comment on the governments actions in term

Q. In 2001 in the UK a widespread disease among cattle and sheep closed off large parts of the countryside. The government decided to give aid to agriculture but not to tourism, both of which were badly affected. Comment on the government's actions in terms of allocative efficiency and equity. [ A Level 2003 Paper 4] Ans. Allocative efficiency occurs when resources are allocated to maximize the net benefit attained through their use. It occurs when consumers' demands are satisfied by using the resources to produce goods and services consumers want. It involves the choice of different points on the production possibility curve which shoes the combinations of goods and services that an economy can produce using its available resources. Once allocative efficiency and productive efficiency (where firms are producing at minimum average cost) is achieved and the two of them coincide, then Pareto optimality is achieved. Pareto optimality means that it is impossible to produce more of one type of good or service without reducing the production of another i.e. ...read more.

Higher profits and more employment will enable an increase in demand for other sorts of commodities too. This demand would cause rise in sales and hence firms will be encouraged to increase their output and in the process hire workers. Therefore via the multiplier the country's output, employment and income would rise. Since food is a basic necessity it obviously increases consumers' satisfaction. Since livestock products will increase consumers' satisfaction and resources are being allocated there , the government may be targeting to achieve allocative efficiency in this way. However, subsidies and other financial aid means those farmers will not be motivated to increase efficiency and produce at the lowest possible average cost. Hence productive inefficiency may arise. In effect, net economic welfare will be reduced and if the productive inefficiency is not offset by allocative efficiency, Pareto optimality will not be achieved. One of the indirect factors of decline in tourism industry is the disease of the cattle and sheep. Governments' direct aid will not benefit the tourism industry if the problem of the livestock industry persists. ...read more.

And farmers will only be able to produce quality livestock products if aid is provided and especially because the economy is hit with a crisis. Therefore with low demand for livestock product the farmers would not be able to recover if this sector is left to free market forces alone. But the tourism sector can be left to free market forces following an appealing advertising campaign. From the taxpayers' viewpoint, equality is further questioned because subsidies from the government are financed from taxes. There are conflicts on how revenue from taxation must be used. The scheme of financing through taxation means that money is taken from the working population and is being distributed to a declining and currently a productively inefficient agricultural industry. Therefore it is not possible for the government to maintain equality as well as allocative efficiency. Both aspects contain an element of value judgments and the optimal level of the economy is difficult to locate and judge. Moreover, since the production possibility frontier contains different points showing allocative efficiency, it is difficult to conclude which point provides greater equity. ...read more.