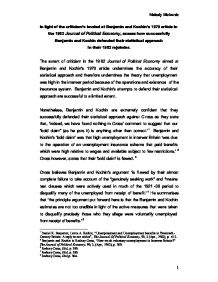 Benjamin and Kochin however highlight that their theory is based on evidence that 'during the twentieth century, unemployment has been low in Britain when unemployment benefits have been unattractive, and unemployment has been high when benefits have been attractive.'33 A substantial defence indeed but this does not address the issue of Post-War unemployment. Benjamin and Kochin however, still feel confident that their defence is successful as they conclude simply, 'that our study is correct.'34 Benjamin and Kochin criticise Metcalf et al. for missing the 'striking difference between the immediate and postwar period35 and so highlight that unemployment was not necessarily low for the whole 'post war' period. Benjamin and Kochin also state that 'their series are biased by their failure to account for the high wages of the postwar entrants to the insurance system.'36 Importantly however Benjamin and Kochin discredit Metcalf et al. by explaining that since OXO systems were the single most important way in which the insurance system was exploited in the interwar period, we conclude that the interwar system was indeed unique and that its administrative features were generous.'37 Benjamin and Kochin have had to respond to an unprecedented amount of criticism, which seriously calls their theory into question. In their 1982 rejoinder, Benjamin and Kochin are confident in their ability to successfully defend their statistical approach, but in reality this success is limited. ...read more.