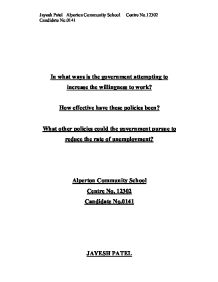 It also encourages people who are on benefits to find a job as before the minimum wage it may have been more beneficial not to work and collect benefits. On the whole the introduction of the minimum wage has improved the willingness to work. New Deal In April 1998 the Labour government introduced a programme called the New Deal, it's a �4 billion + scheme targeted at increasing the employment prospects for the long-term unemployed and reducing structural unemployment by training people to enter sectors where there are many jobs available but not enough employees. The New Deal has been quite effective, as since it was introduced unemployment levels have decreased. In 1998 when the New Deal was introduced unemployment stood at roughly 6.5%, since then it has gone just below 5% and it currently stands at 5.5%. It has helped those without a job gain new skills to be ready for the working world. By July 2001 after 4 years of unemployment the New Deal programme had helped 300,000 youngsters get jobs. However more youths are now out work since the Labour government took over in 1997. Since then youth unemployment has risen by 37,000 from 665,000 to 702,000 in 2006. The new deal helped more than 190,000 get jobs. This would indicate the New Deal programme had been hugely successful, however this is not the case. The new deal has helped however there is a question of many would people would have got jobs anyway without the need of the new deal. There are criticisms of the New Deal. A criticism is that unemployed people attending New Deal courses are not counted towards the Government's official figures for people of working age who are claiming unemployment. Critics say that New Deal was designed with this in mind, to allow the Government to release lower figures for unemployment. I think the new deal has helpful towards increasing willingness to work, however not to the extent to which is being projected. ...read more.

Some of the policies used by the government have been very effective, however some not so much. Increased spending on education and training has been quite effective, as it has helped people learn new skills and helped increase incentive for people to work. The minimum wage has been effective in some ways but not in others. The minimum wage has definitely increase the supply of labour, as people would be more willing to work at a higher wage and this is shown by the reduction in unemployment. However higher wages mean some firms may not be able to keep as many workers at the new wage, and ultimately may have to sack employees. So the minimum wage has its good and bad points. Another way the government has tried to increase willingness work is by introducing the new deal, some see this as a failure some don't. Overall figures show it has got people into jobs, however youth unemployment has risen during this time. Also there is a question over whether the people who got jobs through the new deal would have got jobs anyway without the help of the new deal. There is also a criticism over whether the government introduced the new deal to cover unemployment figures. On the whole I don't think the new deal was that effective. Finally I would recommend that the government carry on with the policies which have been successful such as increased spending, lower taxation, as well as trying to curb inflation along with interest rates and introducing more incentives for people to work, such as schemes similar to the working families tax credit. Reference 1. www.tutor2u.com 2. www.s-cool.com 3. www.bized.com 4. www.revisionguru.com 5. www.ons.com 6. www.bbc.co.uk 7. www.times.com 8. www.guardian.com 9. www.wikipedia.com 10. Daily Mail 11. Guardian 12. Evening Standard 13. Times 14. Economics - 2nd Edition - Alain Anderton 15. Economics revision guide ?? ?? ?? ?? Jayesh Patel Alperton Community School Centre No.12302 Candidate No.0141 - 3 - Jayesh Patel Alperton Community School Centre No.12302 Candidate No.0141 ...read more.