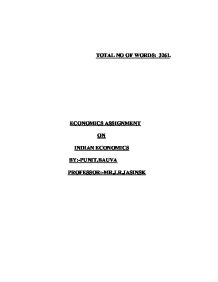 TOTAL NO OF WORDS: 3261. ECONOMICS ASSIGNMENT ON INDIAN ECONOMICS BY:-PUNIT.BAUVA PROFESSOR:-MR.J.R.JASINSK INDEX:- SR.NO TOPICS 1. INTRODUCTION 2. MACRO ECONOMICS 3. HEALTHY ECONOMIC GROWTH. 4. FULL EMPLOYMENT. 5. HEALTHY BALANCE OF PAYMENTS. 6. INFLATION. 7. DEMAND SIDE AND SUPPLY SIDE POLICIES. 8. GROSS DOMESTIC PRODUCT. 9. CONCLUSION. 1. INTRODUCTION: The term "Economics" is derived from two Greek words, oikou and nomos, meaning the rule or law of the household.There are several definitions of economics such as "SCIENCE OF WEALTH" by Adam Smith and J.B.SAY, "SCIENCE OF MATERIAL WELL BEING" by Alfred Marshall and A.C.Pigou, "SCIENCE OF CHOICE MAKING" by Robbins and "SCIENCE OF DYNAMIC GROWTH AND DEVELOPMENT" by Paul.A.Samuelson. Indian Economy is the third-largest in the world.The economy is diverse and encompasses agriculture, handicrafts, textile, manufacturing, and a multitude of services. Although two-thirds of the Indian workforce still earn their livelihood directly or indirectly through agriculture, services are a growing sector and are playing an increasingly important role of India's economy. However, since the early 1990s, India has gradually opened up its markets through economic reforms by reducing government controls on foreign trade and investment. India faces a burgeoning population and the challenge of reducing economic and social inequality. Poverty remains a serious problem, although it has declined significantly since independence, mainly due to the green revolution and economic reforms. Economics is divided into two parts :- Micro Economics and Macro Economics. Micro Economics is that branch of economics that concentrate on price, output and wage decisions of individual firms and workers. On the other hand, Macro Economics concentrates on the overall level of economic activity, such as the size of national income. Here in this assignment we will discuss about the aspects of objectives of Macro Economics and also would discuss on the aspects of Micro Economics. 2. Macro Economics:- It is aggregate economics wherein the overall conditions of the economy such as total production, total consumption, total saving and total investment are studied. ...read more.

High school and university education is more widespread 5. Healthy balance of Payments:-- It is a systematic record of all the economic transactions between one country and the rest of the world in a given period. Balance of trade differs from balance of payments in that the former excludes capital transactions, payments for services and shipment of gold. Balance of payments includes trade balance and in addition the balance of the invisibles as mentioned earlier. Trends in India's Balance of Payments: A country like India, which is on the path of development generally experiences a deficit balance of payments situation. This is because such a country requires imported machines, technology and capital equipments in order to successfully launch and carry out the programme of industrialisation. Also since initially it has only primary goods to offer as exports, it generally has an unfavourable balance of payments position. As pace of development picks India has to have 'maintenance imports' although India has now more sophisticated goods to offer as exports. But the situation remains the same i.e. deficit of balance of payments. We find that there has been significant improvements in the structure of India's balance of payments since the economic crisis of 1991. Comparing the pre-crisis with the post crisis data we find that exports grew at an annual average of 7.6% during 1980-81 to 1991-92 and at an annual average of 10% during 1992-93 to 2000-2001. Similarly, imports grew at 13.7% annum during 1992-93 to 2000-2001 compared with just 8.5% growth rate during 1980-81 - 1991-92 . Moreover, the current account deficit, as percentage of GDP has declined from 1.9% during pre-crisis period to around 1% during post-crisis period and during 2001-03 we had surplus in the current account. Trade Deficit: The trade deficit is large and has widened due to high oil prices and increased non-oil imports. Nevertheless, India's vulnerability to an external crisis remains limited due to its large foreign exchange reserves - which now exceed US$160 billion - its low levels of external debt, and buoyant exports of services. ...read more.

GDP at Constant Prices and at Current Prices: GDP can be estimated at current prices and at constant prices. If the domestic product is estimated on the basis of the prevailing prices it is called gross domestic product at current prices. On the other hand, if GDP is measured on the basis of some fixed prices, that is prices prevailing at a point of time or on some base year it is known as GDP at constant prices or real gross domestic product. GDP at Factor Cost and GDP at Market Price: GDP at factor cost is estimated as the sum of net value added by the different producing units and the consumption of fixed capital. Conceptually, the value of GDP whether estimated at market price or factor price must be identical. This is because the final value of goods and services (i.e. market price) must be equal to the cost involved in their production (factor cost). GDP at market price includes indirect taxes and excludes the subsidies given by the government. Therefore, in order to arrive at GDP at factor income we must subtract indirect taxes from and add subsidies to GDP at market price. In brief GDP (F.C.) = GDP (M.P.) - IT + S Where IT = Indirect taxes. S = Subsidies. Subject 2003 2004 2005 2006 Scale/ Units GDP, constant prices. 23,601.47 25,499.93 27,659.31 29,963.55 Billions/National Currency GDP, current prices. 26,793.41 30,151.82 34,042.90 38,762.25 Billions/National Currency GDP, per capita Con.P. 22,187.04 23,578.30 25,276.96 26,983.12 Units/National Currency GDP, per capita Curr.P. 25,187.70 27,879.63 31,110.72 34,906.63 Units/National Currency GDP, PPP country value. 3,003.97 3,307.18 3,633.44 3,942.18 Billions/Current international dollar 9. Conclusion:-- Economics deals with the laws and principles which govern the functioning of an economy and its various parts. An economy exists because of two basic facts. Firstly, human wants for goods and services are unlimited and secondly, productive resources with which to produce goods and services are scarce. Indian Economy is thus a very mixed one and needs to be improved a lot on various fields such as unemployment, balance of payments, etc. ...read more.