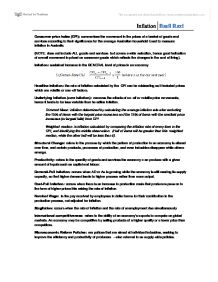 Consumer price Index (CPI): summarises the movement in the prices of a basket of goods and services according to their significance for the average Australian household Used to measure inflation in Australia. (NOTE: does not include ALL goods and services but covers a wide selection, hence good indication of overall movement in priced on consumer goods which reflects the changes in the cost of living). Inflation: sustained increase in the GENERAL level of prices in an economy Headline Inflation: the rate of inflation calculated by the CPI can be misleading as it included prices which are volatile or one-off factors. Underlying Inflation (core inflation): removes the effects of on-off or volatile price movements, hence it tends to be less variable than headline inflation. Trimmed Mean: inflation determined by calculating the average inflation rate after excluding the 15% of items with the largest price increases and the 15% of items with the smallest price increases (or largest falls) from CPI Weighted median: is inflation calculated by comparing the inflation rate of every item in the CPI, and identifying the middle observation. (Half of items will be greater than this weighted median, while the other half will be less than it). Structural Change: refers to the process by which the pattern of production in an economy is altered over time, and certain products, processes of production, and even industries disappear while others emerge. ...read more.

Inflationary Expectations * If individuals in an economy except higher inflation in the future, they will act in a way to increase the inflation. This can be done I two ways: o Prices of g's/s's expected to increase ? consumers purchase goods before price increases. The Increase in consumption ? higher demand-pull inflation. Also if firms expect that demand for their product will increase ? raise prices to maximise ? ?increase in o Employees expect inflation to increase ? during wage negations they will tend to ask for a higher wage rise to keep their purchasing power of their wage. Higher wages increases ? increase in cost pull inflation * Inflationary expectation area problem to policy makers. Individuals expect higher inflation ? bring act to bring higher inflation. High inflationary expectation ? higher inflation ? economic contraction. Imported Inflation * Major cause of this is raising import prices. This will increase the price of imported goods hence increasing the inflation rate. * A depreciation of the Australia dollar will also increase the domestic price of imports ==>� * If imports face competition from locally made products ? importers reduce ? margins ? not pass on to consumers the full effect of depreciation or overseas price rise Other Causes * Government polices ? ...read more.