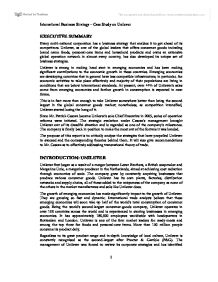 EXECUTIVE SUMMARY Every multi-national corporation has a business strategy that enables it to get ahead of its competitors. Unilever, as one of the global leaders that offers consumer goods including brand name foods, personal-care items and household products and owns an extensive global operation network in almost every country, has also developed its unique set of business strategies. Unilever is strong in making head start in emerging economies and has been making significant contributions to the economic growth in these countries. Emerging economies are developing countries that in general have less compatible infrastructure, in particular, for economic activities to take place effectively and majority of their populations are living in conditions that are below international standards. At present, over 44% of Unilever's sales come from emerging economies and further growth in consumption is expected in near future. This is in fact more than enough to take Unilever somewhere better than being the second largest in the global consumer goods market; nonetheless, as competition intensified, Unilever started losing the hang of it. Since Mr. Patrick Cescau became Unilever's sole Chief Executive in 2005, series of operation reforms were initiated. The strategic evolution under Cescau's management brought Unilever out of its dreadful situation and is regarded as one of the company's milestones. The company is finally back in position to make the most out of the fortune it was handed. The purpose of this report is to critically analyse the strategies that have propelled Unilever to succeed and the corresponding theories behind them. It will also give recommendations to Mr. Cescau as to effectively addressing transnational theory of trade. INTRODUCTION: UNILEVER Unilever first began as a result of a merger between Lever Brothers, a British soapmaker and Margarine Unie, a margarine producer in the Netherlands, aimed at achieving cost reduction through economies of scale. The company grew by constantly acquiring businesses that produce various consumer goods. ...read more.

Together with the streamlining of management and corporate restructuring, resulting greater clarity of leadership, simplification of operations and removal of unnecessary complexity. The restructuring activities from various perspectives worked alongside to improve the company's performance while reducing operation costs at the same time. Apart from modifying the internal structure, Unilever, as to address the increasing public awareness of health and the associated change in diets, has introduced its first functional food - cholesterol-lowering spreads, which has gained recognition from FDA and EU. Since this initiation of health promotion, Unilever has continuously launched various Health Institutions in different countries across the world. It also introduced the Nutrition Enhancement Programme, assessing the levels of trans fats, saturated fats, sodium and sugars in 16,000 products and modify products as necessary. In 2004, a new brand was developed and launched together with the new company logo of Unilever. The new Unilever logo was designed with the aim of promoting the new brand image, with core focuses on the diversity of its products, people as well as the company itself. Under the theory of comparative advantage, Peng (2001: 34-42) suggested that, a country or organization will specialize in producing products that it can easily manufacture, due to the advantage that it has over its competitors. Even if the company has no absolute advantage, the theory states that it should at least identify the products which it has relative advantage and specialise in manufacture them. Unilever Indonesia has a comparative advantage in that, hard-working labour is sufficiently supplied with relatively cheap labour costs where Unilever has no reason for not taking full advantage of the situation offered. In fact, Unilever has setup manufacturing plant in Indonesia and used it to not just produce goods for the local market, but to produce for exportation purposes to other countries in Asia. This clearly demonstrates the application of the comparative advantage theory. Under the absolute advantage theory, a country or organization should produce what it is best at. ...read more.

For example, when producing laundry detergents, 'Surf Excel' is made for the well off people, 'Rin' for the middle class and 'wheel' for the poor. Over 70% of its shampoo is in the form of sachets that are only used once, and are cheap. This kind of product differentiation ensures that all classes in society are catered for and no one is left out. It is a great strategy of meeting the needs of the market as well as maximising the revenue received. In addition to product differentiation, Unilever uses the 'micro-marketing' approach in some of its markets. This is a strategy where a product that fits the whole market is produced. For example, its branch in Indonesia, markets hair conditioner in Makafar where strong emphasis is placed on the sea minerals in the product, however, it has less effects in Jakarta. Unilever discovered that its competitor, P&G was ahead in the US$40 billion shampoo market. Since the company has strong roots in emerging markets and these are the major users of such products, Unilever introduced a new product 'clear'. This shampoo has done very well in the market and was introduced to seven different markets in the first six months of 2007. After five months, this brand overtook P&G's brand to acquire roughly 16% of the market. This brand is about to be taken to Western markets and it would make it the first brand that has been launched in an emerging market. APPLICATION OF TRANSNATIONAL STRATEGY Transnational strategy allows benefits to be attained in global strategies. Overseas structures are integrated with business structure and empowered to be innovative. It is an approach where the management brings its subsidiaries, headquarters and operations together so that these components can cooperate in their functions. In such strategies, companies create alliances with suppliers, customers and other stakeholders in the business thus creating relationships that work well for the business and to balance the pressure for local responsiveness and global integration. In the case of Unilever, Patrick Cescau needs to balance demand for local management of the company, with demand for foreign management. ...read more.

****
The writer covers many main points about the company but is too uncritical and does not point out the contradictions. They repeat a number of points, suggesting they may be too concerned with word count rather than a full understanding of how the company operates at times.