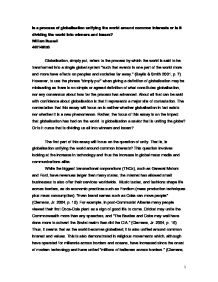 Is a process of globalisation unifying the world around common interests or is it dividing the world into winners and losers?

Is a process of globalisation unifying the world around common interests or is it dividing the world into winners and losers? William Russell 400148053 Globalisation, simply put, refers to the process by which the world is said to be transformed into a single global system "such that events in one part of the world more and more have effects on peoples and societies far away." (Baylis & Smith 2001, p. 7) However, to use the phrase "simply put" when giving a definition of globalisation may be misleading as there is no simple or agreed definition of what constitutes globalisation, nor any consensus about how far the process has advanced. About all that can be said with confidence about globalisation is that it represents a major site of contestation. The contestation that this essay will focus on is neither whether globalisation in fact exists nor whether it is a new phenomenon. Rather, the focus of this essay is on the impact that globalisation has had on the world. Is globalisation a savior that is uniting the globe? Or is it curse that is dividing us all into winners and losers? ...read more.

There is also now a greater ease and speed of transportation for goods and people, as well as a spread of democratic ideals to developed nations. Certainly, it seems a valid argument that globalisation is uniting the world around common interests. However, many sceptics of globalisation would find flaws in this assertion. Many would argue that globalisation has not united "the globe" as it is uneven in its effects and thus only applies to the developed world. As Baylis and Smith commented, " to pretend that even a small minority of the world's population can connect to the World Wide Web is clearly an exaggeration when in reality most people on the planet have probably never made a telephone call in their lives." (Baylis & Smith 2001, p. 10) Thus, not everyone is a "winner" in regards to receiving the benefits of globalisation. And what about the "interests" that are unifying the "world"? Some non-Western countries, such as Singapore, Taiwan, Malaysia and Korea, enjoy economic success but subscribe to "Asian" values. As discussed earlier, globalisation unites many around Western values and thus, there is a somewhat paradox here: how can these countries continue to modernize without successfully adopting such values? ...read more.

In this system, states with smaller economies must compete against each other as well as the powerful countries. This creates a situation described as a "race to the bottom" as nations attempt to underbid each other in the competition for foreign markets and foreign investment. Moreover, when developing nations open up their own economies, local producing industries must compete against well-resourced and aggressive foreign companies in battles they rarely win. These same states are also faced with problems with the rapid expansion of Western companies into their economies, forcing out local producers and distributors. Certainly, it seems quite a strong contention that globalisation is dividing the world into winners and losers. Globalisation is a unifying force that is now, more than ever, connecting societies. Different peoples and societies are rallying around certain interests and values, and different cultures and political and economic systems are shaping lives across borders. The result of this has been great benefits, but benefits that are not shared by the whole globe. Not only are millions of people excluded from the benefits of globalisation, but also the world's strong economies are using globalisation to exploit the economies of developing states. Therefore, this essay concludes that while globalisation is a unifying power, it is certainly also a tool that divides the world into winners and losers. ...read more.

***
The writer has not investigated the economic aspects of this question sufficiently. They have clearly carried out some research but provide no facts and figures relating to the potential benefits of globalisation in terms of poverty etc. Many would argue that the people of China have benefited greatly from globalisation but there is no discussion of this.