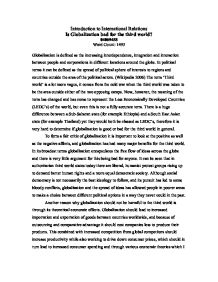 Is Globalization bad for the third world?

Introduction to International Relations Is Globalization bad for the third world? 04069458 Word Count: 1493 Globalization is defined as the increasing interdependence, integration and interaction between people and corporations in different locations around the globe. In political terms it can be defined as the spread of political sphere of interests to regions and countries outside the area of the political actors. (Wikipedia 2006) The term 'Third world' is a lot more vague, it comes from the cold war when the third world was taken to be the area outside either of the two opposing camps. Now, however, the meaning of the term has changed and has come to represent the Less Economically Developed Countries (LEDC's) of the world, but even this is not a fully accurate term. There is a huge difference between a Sub-Saharan state (for example Ethiopia) and a South East Asian state (for example Thailand) yet they would both be classed as LEDC's, therefore it is very hard to determine if globalization is good or bad for the third world in general. To form a fair critic of globalization it is important to look at the positive as well as the negative affects, and globalization has had many major benefits for the third world. ...read more.

(Przeworski 2000) In principle there are no major problems with situation, it is when something goes wrong however that the problems occur. One of the main reasons why globalization has not affected the third world in nearly such a positive way as many economic speculators predicted is due to the way that the IMF lends them money. When investing the IMF adds clauses that state that if the something goes wrong for the western investors they can bail out and are even sometimes given compensation money for the losses that occurred. Although on the surface this may sound positive as it encourages more investors to take on what more risky ventures in less economically stable third world countries it in-fact negative as it leads to speculation and means investors often pull out of a country at the first sign of weakness. (Przeworski 2000) This in terrible for the county that has been invested in because, as they have got rid of all protectionist measures and trade barriers there is nothing to stabilize the economy and so it collapses. The end result of this supposed 'help' then end up being a situation where the economy can never recover as the loan repayments to the IMF are to large and so living conditions remain very poor. ...read more.

(Miguel Lacabana 2003) Now some South American nations, notably Venezuela have moved towards a more socialist democracy and have stopped embracing American aid and investment, instead moving towards a more self-sufficient economic model. Although rising oil prices may caused it, this policy has really worked in Venezuela where standards of living have increased dramatically since the liberal president Hugo Chaves came into power in 1998. It is interesting to note that none of the large nations that are now promoting globalization became powerful through free trade and open markets. In-fact the US, Britain and the other European states became the economic powers they are today through policies of high tariffs, low imports and large exports, not the free trade model they are now promoting. Overall, I personally believe that globalization is inevitable, necessary, and has the potential to be really good for the third world, and increase prosperity globally. The way it is being delivered at the moment however leaves a lot to be desired. Until the powerful organization such as the WTO and the IMF totally reform the methods they use to try and help the third world, globalization is going to be more a hinderence than a blessing. ...read more.