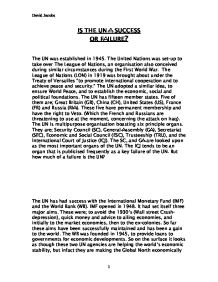 Is the United Nations a success or failure?

IS THE UN A SUCCESS OR FAILURE? The UN was established in 1945. The United Nations was set-up to take over The League of Nations, an organisation also conceived during similar circumstances during the First World War. The League of Nations (LON) in 1919 was brought about under the Treaty of Versailles "to promote international cooperation and to achieve peace and security." The UN adopted a similar idea, to ensure World Peace, and to establish the economic, social and political foundations. The UN has fifteen member states. Five of them are; Great Britain (GB), China (CH), United States (US), France (FR) and Russia (RIA). These five have permanent membership and have the right to Veto. (Which the French and Russians are threatening to use at the moment, concerning the attack on Iraq). The UN is multipurpose organisation boasting six principle organs. They are; Security Council (SC), General Assembly (GA), Secretariat (SEC), Economic and Social Council (ESC), Trusteeship (TRU), and the International Court of Justice (ICJ). The SC, and GA are looked upon as the most important organs of the UN. The ICJ tends to be an organ that is publicised frequently as a key failure of the UN. But how much of a failure is the UN? The UN has had success with the International Monetary Fund (IMF) ...read more.

The UN has been described as failure in a number of ways. The ICJ has a dreadful record. It averages two to three cases per year. It's heard only sixty- four contentious cases between states, passing judgement on under half, and issuing nineteen Advisory Opinions. Infact many of the contentious cases were not of any great international importance! Therefore it has been claimed to be unable to fulfil its role to sufficient standard. For example, within the ICJ's first year it had a case to sort out. 1946 GB vs. Albania. GB ships were damaged and lives were lost, as Albania had apparently mined the Corfu Channel. GB took the issue to the SC, which declared it a legal issue to be viewed by the ICJ. Albania consequently refused to accept the judgement and pay damages. SO it quickly became apparent that there was no value in raising major disputes before the court, because if they cannot cope with a minor country like Albania, then how will they deal with a bigger issue/country. Even now countries do not even bother with the ICJ and most see it as a shambles. But in 1969, miraculously the ICJ did have a little bit of success. West Germany vs. Denmark vs. Netherlands. New principles had to be laid down the dividing up of the continental self beneath the sea. ...read more.

Alternatively with the imminent conflict in Iraq, 100-000 of troops have been sent to the Gulf in very short space of time. This has happened even with Member States expressing their views against this. The UN lacks the resources for mounting and managing big operations. Without troops of it's own, and only a minimal headquarters staff. During the Kosovo crisis 1999, UN showed their incompetence in resolving the situation. Ultimately NATO had to enter the equation and resolve the problem itself. In conclusion, The UN can be described as a success or failure, depending on what organisation we compare it to. In terms of the LON, the UN could be claimed to be a success, as firstly it has arguably been functioning for more than half a centaury. Which some claim is not very long for a world organisation, but it's a longer period than the LON. Compared to NATO, it could be claimed to be a failure, as NATO has had to resolve situations that the UN has been unable to. I.e.-Kosovo, '99. But the UN is a multipurpose organisation, and has many more roles then NATO. Also in terms of IMF, WB, WHO and UNESCO it claim to be a success, but the appalling record of the ICJ, UNCS and Peacekeeping, it could be described as a failure. David Jacobs 1 ...read more.