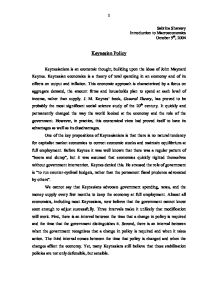 Sabrina Sharawy Introduction to Macroeconomics October 9th, 2004 Keynesian Policy Keynesianism is an economic thought, building upon the ideas of John Maynard Keynes. Keynesian economics is a theory of total spending in an economy and of its effects on output and inflation. This economic approach is characterized by a focus on aggregate demand, the amount firms and households plan to spend at each level of income, rather than supply. J. M. Keynes' book, General Theory, has proved to be probably the most significant social science study of the 20th century. It quickly and permanently changed the way the world looked at the economy and the role of the government. However, in practice, this economical view had proved itself to have its advantages as well as its disadvantages. One of the key propositions of Keynesianism is that there is no natural tendency for capitalist market economies to correct economic stocks and maintain equilibrium at full employment. Before Keynes it was well known that there was a regular pattern of "boom and slump", but it was assumed that economies quickly righted themselves without government intervention. Keynes denied this. He stressed the role of government is "to run counter-cyclical budgets, rather than the permanent fiscal prudence advocated by others". ...read more.

Moreover, all economists agree that a change in real factors ca affect the rates at which workers find and lose jobs; hence, there will always be some fluctuations in employment. Another group of critics have a distinctly different orientation. They argue that there are better means to cure unemployment than active fiscal and monetary policies. For example, they argue that active intervention makes the economy unstable, since policy can change with the opinions of politicians and the central bank. No one can know policy in advance, so they may take actions which are unwise in light of the policy that actually happens. The two most important features of Keynesianism are: first that it introduces the notion of aggregate demand as the sum of consumption, investment, and government spending. Second, it shows that full employment could be maintained only with the help of government spending. Economists still argue about what Keynes thought caused high unemployment. Some think that Keynes attributed unemployment to wages that take a long time to fall. But Keynes actually wanted wages not to fall, and advocated in the General Theory that wages be kept stable. A general cut in wages, he argued, would decrease income, consumption, and aggregate demand. ...read more.

Although they know that rigorous theoretical justification for these positions is hard to come by. Keynesians also feel certain that periods of recession or depression are economic maladies, not efficient market responses to unattractive opportunities. Many, but not all, Keynesians advocate activist stabilization policy to reduce the amplitude of the business cycle, with the rank among the most important of all economic problems. Finally, and even less unanimously, many Keynesians are more concerned about combating unemployment than about conquering inflation. They have concluded from the evidence that the costs of low inflation are small. However, there are plenty of anti-inflation Keynesians. Most of the worlds current and past central bankers, for example, merit this title whether they like it or not. Needless to say, views on the relative importance of unemployment and inflation heavily influence the policy advice that economists give and that policymakers accept. Keynesians typically advocate more aggressively expansionist policies than non-Keynesians. Keynesians' belief in aggressive government action to stabilize the economy is based on value judgment and on the beliefs that a) macroeconomic fluctuations significantly reduce economic well-being, b) the government is knowledgeable and capable enough to improve upon the free market, and c) unemployment is a more important problem than inflation. In conclusion, Keynesian economics is basically a theory of total spending in the economy and of its effects on output and inflation. 1 ...read more.