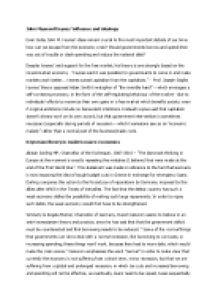 ﻿John Maynard Keynes? influence and ideology Even today John M. Keynes? ideas remain crucial to the most important debate of our time: how can we escape from the economic crisis? Should governments borrow and spend their way out of trouble or slash spending and reduce the national debt? Despite Keynes? avid support for the free market, his theory is one strongly based on the mixed-market economy. ?Keynes said it was possible for governments to come in and make markets work better... Keynes saved capitalism from the capitalists.? - Prof. Joseph Stiglitz Keynes? theory opposed Adam Smith?s metaphor of ?the invisible hand? ? which envisages a self-correcting economy, in the form of the self-regulating behaviour of the market - due to individuals' efforts to maximize their own gains in a free market which benefits society, even if original ambitions include no benevolent intentions. Instead Keynes said that capitalism doesn?t always work on its own accord, but that government intervention is sometimes necessary (especially during periods of recession ? which Keynesians see as an ?economic malady? rather than a normal part of the business/trade cycle. ...read more.

Keynesian theory may be effective in the short term, used in order to ?kick-start? an economy; however it may not work in the long run. This anti-Keynesian idea in the current economic climate is corroborated by Keynes himself: his famous quote ?in the long run, we are all dead?- proving that the long-run is not considered a priority in Keynesian theory. Keynesian theory in practice during a recession Keynes believed that in order for an economy to once again prosper, monetary and fiscal policy would have to be altered. Keynesian theory revolved around the main idea that taxes and interest rates would have to be cut/reduced, leading to more spending. The Method: 1. Central banks (i.e. The Bank of England) would lend to commercial banks at lower interest rates. 2. From there, commercial banks would lower their own interest rates to take advantage of the interest rate cut instigated by the central bank. ...read more.

Governmental tax cuts would also help an economy to prosper and emerge from recession. Tax cuts would lead to cheaper production, products and services. Rationality allows the assumption that demand will rise due to an increase in consumer confidence. Increase in demand leads to more payments for goods and services by households to firms: therefore allowing the payment of factors to increase ? in turn causing households to have higher incomes, thus leading to an increase in expenditure (received by firms.) This would eventually lead to growth above the trend growth. This cycle of money is demonstrated by the circular flow model 2 (shown below). Eventually a government would be able to repay the loans (received upon the release of bonds) as tax revenue would increase exponentially to the original investment; this is known as the multiplier effect and is demonstrated by the Hoover Dam investment of $49 million in 1931. Besides this architectural development and its use ?supplying hydro-electric power; private investment in the area also went up (seemingly out of nowhere, having previously been an almost empty desert.)- Circular flow Model 2 ...read more.