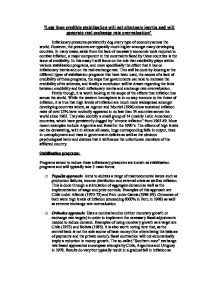 'Less than credible stabilisation will not eliminate inertia and will generate real exchange rate overvaluation'.

'Less than credible stabilisation will not eliminate inertia and will generate real exchange rate overvaluation' Inflationary pressures persistently dog every type of economy across the world. However, the pressures are typically much higher amongst many developing counties. In many cases, aside from the lack of necessary economic tools required to combat inflation, a major component in the constraints faced by these countries is the issue of credibility. In this essay I will focus on the role that credibility plays within various stabilisation programs, and more specifically the effect that it has on inflationary inertia and on the real exchange rate. This will be done by looking at the different types of stabilisation programs that have been used, the causes of a lack of credibility of these programs, the steps that governments can take to increase the credibility of its schemes, and finally a conclusion will be drawn regarding the links between credibility and both inflationary inertia and exchange rate overvaluation. Firstly though, it is worth looking at the scope of the effects that inflation has across the world. While the western hemisphere is in no way immune to the threat of inflation, it is true that high levels of inflation are much more widespread amongst developing countries where, as Agenor and Montiel (1996) ...read more.

Once expectations are formed as a result of a policy announcement, there is a strong temptation on the governments to renege on the policy in order to peruse additional objectives. An example of this would be the incentive to devalue a currency in order to promote output after announcing a fixed exchange rate, the policy that the public's initial expectations were formed around. Governments often have to balance economically sound policies with politically popular ones. Unemployment levels are extremely politically sensitive, with a large rise in unemployment almost certain to cause civil unrest. As decreasing unemployment and disinflation are, by and large, the incentive in this case to renege is high - something that the public and private investors are only too aware. The sequencing of micro and macroeconomic policies is also very important, and the implementation of necessary microeconomic policies such as wage and price controls, or tax reforms, before the macroeconomic measures is essential. If the government fails to do this (as in Argentina in 1985 where wage-price controls were implemented after the announcement of a fixed exchange rate), the stabilisation process will lack credibility and inflationary inertia will still be persistent. Imperfect information: If, as in many developing countries over the years, there is a rapid change of policy makers it is very hard for the public to gauge how credible a government's commitment to disinflation is. ...read more.

To conclude, we have seen that many stabilisation programs, and in particular, those which entail a fixed-exchange rate as a nominal anchor often lack a high degree of credibility. In the case of, amongst others, Chile (1978), Uruguay (1978) and the continuing attempts in Brazil and Argentina these have resulted in an overvaluation of the domestic exchange rate and eventual devaluation. We have also seen that the degree of inflationary inertia faced by an economy will prolong the recovery period from high or chronic inflation. Due to the aforementioned causes of credibility, it makes intuitive sense that such inflationary episodes involving a high level of inertia such as Chile (1965-70, 1972-80 & 1982-86), Bolivia (1973-74, 1982-86) and Zaire (1976-89) as well as the above examples and many others suffered a high level of inertia as a result of the lack of credibility of the stabilisation programs. Edwards, in his study of Chile and Mexico reinforces this view and finds a direct link between the level of inertia and perceived credibility. While it is accepted that the level of credibility that a program holds is by no means the sole factor of inertia or exchange rate overvaluation, it does have a significant influence on them and should be treated with the appropriate regard by any government implementing a stabilisation program. ...read more.