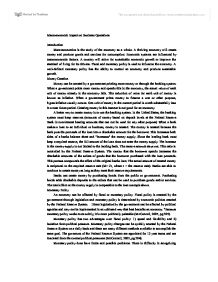 Macroeconomic Impact on Business Operations Introduction Macroeconomics is the study of the economy as a whole. A thriving economy will create money and produce goods and services for consumption. Economic systems are influenced by macroeconomic factors. A country will strive for sustainable economic growth to improve the standard of living for its citizens. Fiscal and monetary policy is used to influence the economy. A well-defined monetary policy has the ability to control an economy and produce sustainable growth. Money Creation Money can be created by a government printing more money or through the banking system. When a government prints more money and spends this in the economy, the actual value of each unit of money already in the economy falls. This reduction of value for each unit of money is known as inflation. When a government prints money to finance a war or other purpose, hyper-inflation usually occurs. One unit of money in the current period is worth substantially less in a near future period. Creating money in this manner is not good for an economy. A better way to create money is to use the banking system. In the United States, the banking system must keep reserves (amounts of money based on deposit levels at the Federal Reserve Bank in non-interest bearing accounts that can not be used for any other purpose) ...read more.

Monetary policy works because the United States banking system is a fractional reserve system. A fractional reserve system requires banks to keep part (a percentage or fraction) of their money in the Federal Reserve Bank. This percentage of money can not be used for productive purposes. The Federal Reserve affects the money supply by using three tools: 1- Open-market operations (the buying or selling securities - this will change checkable deposits by adding or removing money from the buyer/seller), 2- Reserve Ratio (lowering or raising banking reserve requirements - changes the amount of money available for making loans or purchasing securities by changing the amount of money a bank must "leave" at the Federal Reserve Bank) and 3- Discount Rate (the lowering or raising of the discount rate at the Fed Window - makes borrowing from the Federal Reserve more advantageous or less advantageous for a bank). The first option in each of the above parameters will increase the money supply and the latter will decrease the money supply. Effect of Monetary Policy on Macroeconomic Factors The macroeconomic factors are: gross domestic product, unemployment, inflation and interest rates. Monetary policy affects each of these factors in unique ways. Identifying the factor that one must change and properly adjusting monetary policy to affect the desired change is the challenge for monetary policy. Gross domestic product (GDP) ...read more.

Current economic outlook by the Federal Reserve System considers inflation a major concern "the FOMC decided to extend the firming of policy that it had implemented over the previous eighteen months by tightening the policy rate 25 basis points, to 4-1/2 percent" (Federal Reserve, 2006). Therefore, open market operations were performed that would lower interest rates by 1/4 %. This increased the money supply to help increase GDP and lower unemployment and is believed to be a small enough increase to keep inflation from rising. This is the Federal Reserve System's recommended monetary policy and the policy that the author recommends. Conclusion Money creation and control is determined by fiscal and monetary policy. A sustained economic growth indicated by an increase in gross domestic product is desired by economic systems. Monetary policy is the most effective way that governments have in influencing economic conditions. Monetary policy will affect gross domestic product, inflation, unemployment and interest rates in an economy. The proper use of monetary policy by governmental entities will enable an economy to attain sustainable growth and reduce the effects of inflation. Gross domestic product growth will also reduce unemployment in an economy. The current United States Federal Reserve monetary policy of increasing the money supply is perceived as a means to slowly increase GDP, reduce unemployment and keep inflation stable. This policy is the current recommended policy by the author as the best to produce sustainable economic growth and keep inflation stable. ...read more.