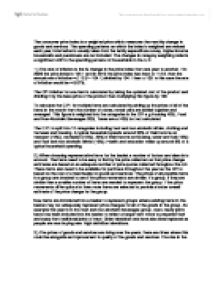 The consumer price index is a weighted price which measures the monthly change in goods and services. The spending patterns on which the index is weighted are revised each year, information is usually taken from the family expenditure survey. Higher income households and pensioners are not included. The changes in category weighting reflects a significant shift in the spending patterns of households in the U.K 1.) The rate of inflation is the % change in the price index from one year to another. If in 2009 the price index is 104.1 and in 2010 the price index has risen to 112.5, then the annual rate of inflation = (112.5 - 104.1) divided by 104.1 then x 100. In this case the rate of inflation would be = 8.07%. The CPI inflation for one item is calculated by taking the updated cost of the product and dividing it by the base price of the product then multiplying this figure by 100. ...read more.

The prices of all possible items in a group are checked to see if the price movements are similar; if a group, if they are similar then a smaller number of items are needed to represent the group. If the price movements differ quite a lot then more items are selected to provide a better overall estimate of the price change for the group. New items are introduced into a basket to represent groups where existing items in the basket may not adequately represent price changes for all of the goods in the group. An example this year is in the food and non alcoholic beverages group, oven- ready joints have now been included into the basket to reflect a longer term move to prepared food and away from traditional joints of meat. Older television sets have also been replaced as people are now buying new high definition televisions. 3.) The prices of goods and services are rising over the years, there are times where this could be alongside an improvement in quality of the goods and services. ...read more.

As the prices of houses are not included the CPI will not necessarily be useful for measuring the change in the cost of living. The increases in benefits and pensions linked to the CPI may be too small to maintain their real value. The spending pattern of individuals on these schemes are not included when weighting the CPI categories; using the CPI to measure the increase these schemes should receive may result in the pay rise becoming insufficient. The CPI aims to represent the expenditure of an 'average' household. The average that the CPI calculates does not necessarily represent the change in the expenditure of an individual; there are individuals that have very different spending patterns compared to what is seen as the 'average' household. An individual that spends a lot of time exercising and playing sport may spend more money on leisure services and footwear than the 'average' household; A family or individual without a car would spend much less on petrol and car maintenance than the CPI predicts the 'average' household may spend. The Consumer Price Index ...read more.