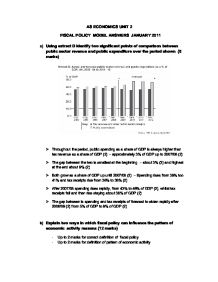 Using the data and your knowledge of recent economic events, assess the contribution that fiscal and monetary policies can make in maintaining a stable economy

Fiscal policy involves the use of government spending and tax receipts to influence the level and pattern of economic activity, whilst monetary policy uses interest rates to achieve the same. Fiscal and monetary policy can be used to influence short term AD with the aim of promoting a steady rate of economic growth, low unemployment and low inflation. In a recession there will be a loosening of monetary policy when interest rates are cut and a budget deficit run with the aim of boosting AD throughout the economy. This is what is happening at the moment in the UK as the economy slowly comes of out recession. Interest rates are down to 0.5% and income tax rates are slowly being cut to act as a incentive to workers to work harder and boost productivity. However, as we see in the UK economy these policies are having a very slow impact on growth. Consumer confidence and business confidence is very low and when this happens cuts in interest rates and taxes will not encourage household and consumers to spend more. They may be tempted to use the extra money to save more and pay off debt rather than spend and this could hinder economic recovery. ...read more.

Such policies as spending government money on education and training will improve productivity and provide a boost to the supply side of the economy. Other policies such as reducing benefits to encourage unemployed people to enter work will help boost AS in the economy. However whilst supply side policies can help boost output, there needs to be increases in AD at the same time to ensure that there is sufficient spending to buy up the extra output. It is therefore important to ensure that fiscal and monetary policy works on both the demand side and supply of the economy if it wants to promote economic stability. In conclusion, there are a range of fiscal and monetary policy measures the government can use to promote economic stability. It is important that policies work on both the short term AD side of the economy and long run AS of the economy so that there is a balance at play. Also stability in the economy might be affected by what is happening in other world economies and it becomes difficult for fiscal and monetary policy to work effectively if the Uk economy is affected by the working of other economies and also any economic shocks which might occur in the wider world economy. Analysis in normal type - evaluation in italics ...read more.