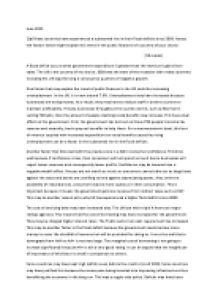 Many countries have experienced a substantial rise in their fiscal deficits since 2008. Assess the factors which might explain this trend in the public finances of a country of your choice

﻿June 2011 1)a) Many countries have experienced a substantial rise in their fiscal deficits since 2008. Assess the factors which might explain this trend in the public finances of a country of your choice. [20 marks] A fiscal deficit occurs when government expenditure is greater than the revenue it gains from taxes. The UK is the country of my choice. 2008 was the start of the recession with many countries including the UK experiencing 2 consecutive quarters of negative growth. One factor that may explain the trend of public finances in the UK could be increasing unemployment. In the UK, it is now around 7.8%. Unemployment may have increased because businesses are losing money. As a result, they may have to reduce staff in order to survive or maintain profitability. ...read more.

Another factor that links well with the previous one is a fall in consumer confidence. This links well because if confidence is low, then consumers will not spend as much hence businesses will report lower revenues and consequently lower profits. Confidence may be lowered due a negative wealth effect. Houses are not worth as much so consumers cannot take out as large loans against the value and banks are unwilling to lend against depreciating assets. Also, with the possibility of redundancies, consumers may be more cautious in their consumption. This is important because it means the government gets less revenue from indirect taxes such as VAT. This may be another reason as to why UK has experienced a higher fiscal deficit since 2008. ...read more.

The marginal cost of borrowing is not going to increase significantly because AA+ is still a very good rating. It can be argued that the magnitude of importance of this factor is small in comparison to others. Some countries may have kept high deficits even before the credit crisis of 2008. Some countries may have justified this because the money was being invested into improving infrastructure thus benefitting the economy in the long run. This was a supply side policy. Deficits may have been kept so that, with the aid of inflation, the real value is eroded and reduced. I believe that low consumer confidence is one of the most important factors as to why the UK has a rise in the fiscal deficit because falling consumer consumption means the government gets less revenue from VAT and businesses suffer so workers are let go. This in turn increases pressure on government due to more benefits being payed. ...read more.