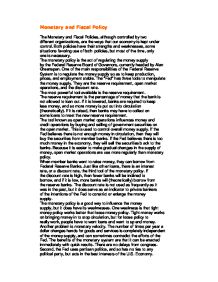 Monetary and Fiscal Policy The Monetary and Fiscal Policies, although controlled by two different organizations, are the ways that our economy is kept under control. Both policies have their strengths and weaknesses, some situations favoring use of both policies, but most of the time, only one is necessary. The monetary policy is the act of regulating the money supply by the Federal Reserve Board of Governors, currently headed by Alan Greenspan. One of the main responsibilities of the Federal Reserve System is to regulate the money supply so as to keep production, prices, and employment stable. The "Fed" has three tools to manipulate the money supply. They are the reserve requirement, open market operations, and the discount rate. The most powerful tool available is the reserve requirement. The reserve requirement is the percentage of money that the bank is not allowed to loan out. If it is lowered, banks are required to keep less money, and so more money is put out into circulation (theoretically). ...read more.

The monetary policy is a good way to influence the money supply, but it does have its weaknesses. One weakness is that tight money policy works better that loose money policy. Tight money works on bringing money in to stop circulation, but for loose policy to really work, people have to want loans and want to spend money. Another problem is monetary velocity. The number of times per year a dollar changes hands for goods and services is completely independent of the money supply, and can sometimes contradict the efforts of the Fed. The benefits of the monetary system are that it can be enacted immediately with quick results. There are no delays from congress. Second, the Fed uses partisan politics, and so has no ties to any political party, but acts in the best interests of the U.S. Economy. The second way to influence the money supply lies in the hands of the government with the Fiscal Policy. The fiscal policy consists of two main tools. ...read more.

Because a tax cut can take a year to really take effect, the economy could revive from the recession and the new unnecessary tax cut could cause inflation. Politics are another problem. Unlike the monetary policy run by the partisan Fed, the fiscal policy is initiated by the government, and so politics play a key role in the policy. When the concerns of the government are viewed, it becomes obvious that a balanced budget is not the primary objective, anyway. The fiscal policy can also be used as a campaign tactic. If tax cuts are initiated and government spending is increased, then the president is more likely to be re-elected, but has first to deal with the inflation his tactic caused. Monetary and fiscal policies are what helps keep the nation's economy stable. With them it is possible to control demand for services and goods and the ability to pay for them. It is possible to manipulate the money in private hands without directly affecting them. The policies are simply a myriad of tools used to prevent a long period where there is high unemployment, inflation, and prices, along with low wages and investment. ...read more.