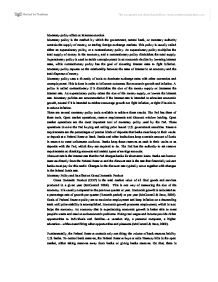 Fundamentally, the Federal Reserve controls only one thing; the volume of bank reserves held by U.S. banks. To control bank reserves, the Federal Reserve buys or sells Treasury bills in the open market, either taking reserves away from banks or giving banks reserves. On that, there is basically no choice. Measuring GDP is complicated but the calculation can be done in one of two ways: either by adding up what everyone earned in one year (income approach), or by adding what everyone spent (expenditure method). Both measures should arrive at approximately the same total. A significant change in GDP, up or down, usually has a significant effect on the stock market. It's not hard to understand why: a bad economy usually means lower profits for companies, which in turn means a decrease in stock prices. Growth lessens the burden of scarcity (McConnell & Brue, 2008). Monetary Policy effect on Unemployment When the economy is healthy, you will generally see low unemployment and wage increase as businesses demand labor to meet the economy. Monetary policy has two basic goals: to promote "maximum" output and employment and to promote "stable" prices (Money 2008). Since the Fed cannot control inflation or affect output and employment directly it makes and impression indirectly, through raising or lowering short-term interest rates. ...read more.

However, unemployment rates in the intermediate range are usually difficult to interpret (Money 2008). There are two types of inflation: Demand-pull Inflation and Cost- push Inflation. Interest rates Monetary policy causes an increase in bond prices and a decrease in interest rates. A free market rate of interest is a composite of three factors: the originally rate of interest, the risk premium, and the price inflation or deflation (rare since 1933) premium (North 2006). Conclusion It is amazing at how little we know about where our money goes or comes from. Many people are content with the simple knowledge that our money goes in our banks of choice. However, things are not as simple as they seem. Our money goes somewhere and it affects us all where it ends up. It is obvious that everything is interrelated. Every decision made has an impact on the bigger picture. Monetary policy can have a positive as well as a negative effect on everyday people. This can be manifested primarily through a shift in employment status. The government, however, has many tools in order to help the situation. These tools at time can improve or even deteriorate the dilemma. They are made to bring the economy out of crisis. But there is no doubt that monetary policy has a tremendous effect on macroeconomic factors as GDF, unemployment, inflation, and interest rates. ...read more.