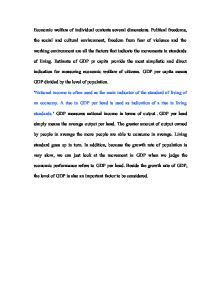 Economic welfare of individual contents several dimensions. Political freedoms, the social and cultural environment, freedom from fear of violence and the working environment are all the factors that indicate the movements in standards of living. Estimate of GDP pr capita provide the most simplistic and direct indication for measuring economic welfare of citizens. GDP per capita means GDP divided by the level of population. 'National income is often used as the main indicator of the standard of living of an economy. A rise in GDP per head is used as indication of a rise in living standards.' GDP measures national income in terms of output .GDP per head simply means the average output per head. The greater amount of output owned by people in average the more people are able to consume in average. Living standard goes up in turn. In addition, because the growth rate of population is very slow, we can just look at the movement in GDP when we judge the economic performance refers to GDP per head. Beside the growth rate of GDP, the level of GDP is also an important factor to be considered. 1995(QUATATION MARK) The overall trend of the UK's GDP at constant price is upwards slopping. The GDP had increased from �224956m to �829517m between 1960 and 2000. ...read more.

We should look at both absolute value and employment rate. Especially when we compare changes of employment from economy to economy, the absolute number tends to be unreliable due to different size of population. The model for calculating the unemployment rate seems straightforward. (Unemployment rate = the unemployed/workforce) but difficulties come up with how to define the term 'unemployed' and 'workforce'. Claimant account and ILO account are two main approaches to unemployment in the UK. Both measures are not perfect. Claimant account method is base on the administration of unemployment. So the data is relatively easy to obtain and cost to calculate is very low. But the most obvious disadvantage is that eligibility can be changed by some political purpose. That makes Claimant account not reliable and not comparable internationally. ILO account uses 'the survey method'. Namely, the data is taken from wider survey of unemployment. The downside is that it takes more time and money to acquire the sources. The advantage is that it allows international comparison. Claimant account graph Figure shows the changes of unemployment in real number from 1950 to 1998. There were many insignificant fluctuations in employment before mid of the 1970s and the number rarely above 500,000. Employment rate for first 25 years is less than 2.5%. After 1975, the climate of unemployment worsens dramatically. The number of unemployment is never below 1 million. ...read more.

But UK's inflation performance is getting better in the most recent years. A healthy economy tends to have relatively low inflation because a high rate of inflation will directly reduce the purchasing power of consumer. For instance, inflation is 50% this year. The same amount of money in this year will only be able to buy half amount of goods in last year. Also, high inflation will have negative impact on economic growth, which in turn slow down the growth rate of living standards. A low unemployment is also required in a strong economy. A high unemployment means that the economy hasn't been operated in full capacity and living standards could be improved. Obviously living standard of the unemployed is poor. UK performed very well in both inflation and unemployment before the mid of 1970s. Afterwards, the UK's economic performance in terms of inflation and unemployment is poor although the recent statistic shows some sign of getting better. Low Growth rate of GDP in UK is understandable partly due to the big base level. Some economists point out the poor economic performance in raising living standards is because of experience of three major recessions. From the data you can see the UK citizen's living standards have been improving but slowly relative to main competitors. But the data is I gained is still very crude. There many other criteria should be included such as distribution of income/welfare, productivity, pollution and so on. ...read more.