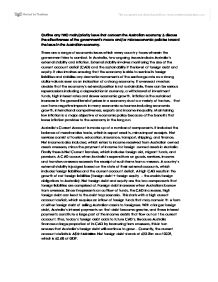 Outline any TWO main/priority issue that concern the Australian economy & discuss the effectiveness of the government's macro and/or microeconomic policies toward the issue in the Australian economy. There are a range of economic issues which every country faces wherein the government tries to combat. In Australia, two ongoing issues include Australia's external stability and inflation. External stability involves monitoring the size of the current account deficit (CAD) and the sustainability if the level of foreign debt and equity. It also involves ensuring that the economy is able to service its foreign liabilities and stabilise any dramatic movements of the exchange rate as a strong dollar value is seen as an indication of a strong economy. If overseas investors decide that the economy's external position is not sustainable, there can be serious repercussions including a depreciation in currency, a withdrawal of investment funds, high interest rates and slower economic growth. Inflation is the sustained increase in the general level of prices in a economy due to a variety of factors, that can have negative impacts in many economic outcomes including economic growth, international competiveness, exports and income inequality. Maintaining low inflation is a major objective of economic policy because of the benefits that lower inflation provides to the economy in the long run. ...read more.

In addition, even those economists who remain concerned about Australia's external imbalance accept that when macroeconomic policies have in past targeted external stability, they have generally been ineffective. External stability issues are now addressed through the general framework, which is designed to promote the international competitiveness of the Australian economy, to increase exports; to encourage savings by households and businesses, to contain the growth of foreign debt and maintaining international investor confidence in the Australian economy and its financial institutions, to reduce fluctuations in the value of the exchange rate. Maintaining low inflation is major objective of economic policy because the benefits of lower inflation provides to the economy in the long term. Australia has enjoyed relatively low levels of inflation since the early 1990s because inflation overseas has been lower and economic policies have placed a high priority on the objective of low inflation. The annual rate of inflation is calculated by the percentage change in CPI over the year. Inflation rate (%) = CPIcy - CPIpy x 100 CPIpy 1 Consumer Price Index is the movement in prices of goods and services according to their significance for the average Australian household. Economist generally recognise four main causes of inflation -Demand pull: In a market economy, prices are determined by the interaction of demand and supply in the market place. ...read more.

The Reserve has also attempted to make use of monetary policy predictable by emphasising consistently its intention to use monetary policy predictable by emphasising consistently its intention to use monetary policy primarily to ensure that inflation remains within the target band, effectively lowering inflationary expectations and thus further reducing inflation an s problem in the economy. Fiscal policy can also play a role in maintaining low inflation. If the government increases revenue and decreases spending, this reduces demand pressures in the economy and can reduce demand pull inflation. Fiscal policy settings that support low inflation objective may also reduce the need for higher interest rates to combat an inflation challenge. Reduced protection is a microeconomic policy which has helped reduce inflation over the years, as it lowers the price of imports and increases the competition faced by domestic producers from both overseas competitors and from new entrants into domestic markets. This makes it more difficult for domestic producers to raise their prices. In addition, reforms to the labour market attempt to ensure that wage increases are linked to productivity improvements. Of productivity rises, the economy will be able to afford real wage increases without inflationary pressures. Finally, government has argued that its greater spending on economic infrastructure such a roads, railways and ports in coming years is necessary to reduce to capacity constraints faced by business that increase production costs and contribute to inflation. ...read more.