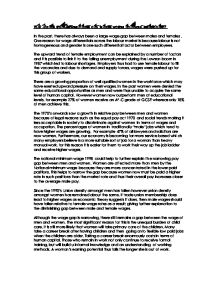 Pay differences between men and women

Why has the gap between male and female wages narrowed significantly?

In the past, there has always been a large wage gap between males and females. One reason for wage differentials across the labour market is because labour is not homogeneous and gender is one such differential factor between employees.

The upward trend of female employment can be explained by a number of factors and it is possible to link it to the falling unemployment during the Lawson boom in 1987 which led to labour shortages. Employers thus had to use female labour to fill the vacancies and due to demand and supply forces, wages were pushed up for this group of workers.

There are a growing proportion of well qualified women in the workforce which may have exerted upward pressure on their wages. In the past women were denied the same educational opportunities as men and were thus unable to acquire the same level of human capital. However women now outperform men at educational levels, for example 27% of women receive an A*-C grade at GCSE whereas only 18% of men achieve this.

The 1970’s onwards saw a growth in relative pay between men and women because of legal reasons such as the equal pay act 1970 and social trends making it less acceptable in society to discriminate against women in terms of wages and occupation. The percentages of women in traditionally “male” jobs which tend to have higher wages are growing.  For example 47% of all lawyers and solicitors are now women. Furthermore, our economy is becoming far more service based which many employers believe is a more suitable sort of job for a woman than heavy manual work, for this reason it is easier for them to work their way up the job ladder and receive higher wages.

The national minimum wage 1998 could help to further explain the narrowing pay gap between men and women. Women are affected more than men by the National minimum wage because they are more concentrated in the lower paid positions. This helps to narrow the gap because women now must be paid a higher rate in such positions than the market rate and thus their overall pay increases closer to the average male pay.

Since the 1990’s Union density amongst men has fallen however union density amongst women has remained about the same. If trade union membership does lead to higher wages as economic theory suggests it does, then male wages should have fallen relative to female wage rates as a result; giving further explanation to the diminishing gap between male and female wages.

Although the wage gap is narrowing, there still remains a gap between the wage of men and women. The most significant reason for this is the unequal burden of child care. It is still more likely that women will take primary care of the children. Many take a career break after having children and then going onto flexible low paid jobs when the children are older. Taking a career break enormously costs in terms of human capital. Those who remain in work not only continue to receive formal training, but will build u informal knowledge and an understanding of working methods. A woman’s earning potential thus falls the longer she is out of work.

It may also be that women have a lower geographical mobility in comparison to that of men, meaning that they are less willing to supply their labour to jobs which are situated further away. This may be because they have to look after children or cook for their family and are therefore unlikely to travel to far away from their home.

Wages are not the only way in which labour is rewarded, for example to find out exactly how much the difference between the way in which men and women has narrowed in recent years it would be useful to look into factors such as the number of women with perks such as a company car. The extent to which pay differentials are down to discriminatory factors or to do with a woman’s personal choice of job and lifestyle is unclear. It may be that women are more attracted to lower paid but community centred roles than men such as care work which have a benefit to the women in terms of personal satisfaction rather than in wages.

The wage gap between men and women has reduced significantly in recent years and this is down to many factors, the most significant of which is the increased opportunities available to women such as education and service sector jobs due to the changing structure of the UK economy. There is still a gap between wages of men and women and this is for a number of reasons. Although it has been illegal for a number of years to discriminate on the grounds of gender, there is evidence that employers have continued to respond to the less stable working patterns of women by offering less training and lower pay to women; however this is a declining trend. Women at the top end of the job ladder complain of a “glass ceiling” beyond which their male bosses refuse to promote them, again this is diminishing leading to the narrowing of the pay gap. Changes in social attitudes take time to come into effect and thus as time goes on we should see further narrowing of the pay gap between men and women.