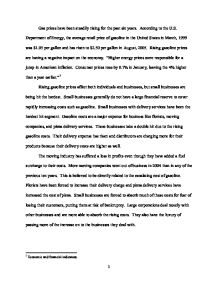 Rising Gasoline Price and its Effect on the US Economy

Gas prices have been steadily rising for the past six years. According to the U.S. Department of Energy, the average retail price of gasoline in the United States in March, 1999 was $1.05 per gallon and has risen to $2.50 per gallon in August, 2005. Rising gasoline prices are having a negative impact on the economy. "Higher energy prices were responsible for a jump in American inflation. Consumer prices rose by 0.7% in January, leaving the 4% higher than a year earlier."1 Rising gasoline prices affect both individuals and businesses, but small businesses are being hit the hardest. Small businesses generally do not have a large financial reserve to cover rapidly increasing costs such as gasoline. Small businesses with delivery services have been the hardest hit segment. Gasoline costs are a major expense for business like florists, moving companies, and pizza delivery services. These businesses take a double hit due to the rising gasoline costs. Their delivery expense has risen and distributors are charging more for their products because their delivery costs are higher as well. The moving industry has suffered a loss in profits even though they have added a fuel surcharge to their costs. ...read more.

Demand plays a major role in the price of gasoline. "High demand is led by the United States market, the source of an increasing percentage of the world's demand for petroleum. The U.S. economy currently accounts for one-quarter of all demand."4 China leads the third world nations in crude oil demand. China is developing a car culture similar to western countries and their manufacturing industries are experiencing rapid growth as well, adding significantly to world demand. Supply is also a key player in determining gasoline prices. There is fear that oil suppliers will be reduced in future years. This fear is based on many existing and emerging world circumstances. The growing turbulence in the Middle East is one of the most critical factors. The Middle East is the world's largest oil producing region and turbulence in this area threatens the world's oil supply. Other factors include the war in Iraq, Iran's emerging nuclear program, and the instability stirring in Saudi Arabia after the death of King Fahd. All these factors could lead to a dramatic decrease in the supply of oil. ...read more.

Many factors contribute to rising oil prices. Political instability is the norm in the major oil producing nations. This unrest has existed for many years with no end in sight. The recent threat of terrorism could have a disastrous affect on the economy and oil supplies at any time. In addition, the United States oil supply is threatened by natural disasters caused by unstable weather conditions. And, demand for crude oil keeps increasing with no end in sight. While many believe price gouging is at least partially responsible for rising gasoline prices, research indicates it is an incredibly small piece of the pricing puzzle. The price of crude oil reflected in the rising price of gasoline is determined by market forces of supply and demand. The future will continue to see fluctuations and increases in the price of crude oil and gasoline. Many factors contribute to this existing pattern. We live in a world of increased demand by industry and individual consumers. Society is unwilling to make the necessary sacrifices needed to help stabilize crude oil demands. Americans continue to drive gas guzzling SUV's and avoid car pooling like the plaque. We are a spoiled society willing to pay the price for our desired life style. ...read more.