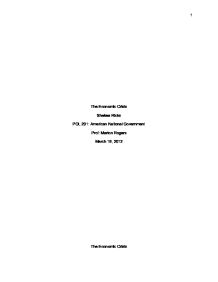 The Economic Crisis. Right now in America, we are in an economic crisis that is slowly tearing the seams that holds the countrys banking system together. This recession affects everyone from single families to giant corporations b

The Economic Crisis Shakea Ricks POL 201: American National Government Prof: Marion Rogers March 19, 2012 The Economic Crisis Right now in America, we are in an economic crisis that is slowly tearing the seams that holds the country's banking system together. This 'recession' affects everyone from single families to giant corporations because of the nature of the crisis. It began slowly with it quickly picking up the pace, and now with all the new policies in effect the end is now in sight. It seems that everyone in America played their part in a tedious game that only took a matter of time to come crashing down around all of us. Because of the unstable economy, companies were forced to downsize their employee work force or close their doors. The loss of a job threatened many working class and middle class families with the threat of bankruptcy, because of the increasing accumulation of consumer debt. Jobs were hard to find; in addition, many people without a choice, were forced to sell their homes; many of them moved to states where the cost of living was lower. Most of them took low paying jobs to support their family. The unfortunate ones took from seven months to a year before they could find a decent job. Others who were fortunate could sit and wait or started their own business, and the rest either took out a home equity loan or refinance to lower their mortgage payment. ...read more.

Most of the bad loans originated in the US subprime mortgage market. Then the US mortgage companies and banks thought it was a good idea to sell these bad loans to different banks around the world. However, these were bundled and repackaged into collaterized debt obligations. They were given triple a ratings and bought by banks around the world. Therefore, when mortgage defaults occurred in the US, the losses were felt by the whole global banking system because most banks had some exposure to these bad loans. During the aftermath of the economic crisis there were some key players and each had a role to get the economy back on track. The key players that affect the policies that are implemented after the economic crisis are the President, the Congress, the Secretary of the Treasury, and the Chairman of the Federal Reserve. Each of these people or group will affect the policies and how they are enforced to the citizens. As the election day of 2008 was approaching the citizens made some changes that may be for the best or could hinder the overall effect of the plan to get out of this crisis. With the unemployment rate climbing higher, and as the election for some of the key players in Washington on the line, many voters were ready for a change. As voters cast their vote and the votes were counted the new President was announced. ...read more.

I know that a lot of people feel that it is not helping, but I like to remind people it took us more than 10 years to get into the mess that we are in. No one can expect for the current situation to be gone in less than 2 years. I do however; believe that the federal government should not have bailed out the homeowners. These individuals knew that they could not afford the homes before they bought them, and after the economy got bad they expected someone to give them a handout. The only thing that I can see as a weakness for any of these policies is the enforcement of them. Each policy is unique, but each has to be enforced in a certain way. Although I am glad to see the economy doing a bounce back, I am more concerned that the citizens will not give our government enough time to make sure it is stable again. Everyone is so set in blaming the President for the economy, when the only people that really need to be blamed are we. In conclusion, I feel that each key player has their own set goals on where they would like to see the economy, but are willing to do whatever is necessary to stabilize the economy. I also think that each policy has been set up to help boost the economy back to its original place since if the U.S. economy is experiencing difficulties then the world economy will be faced with its own problems. ...read more.