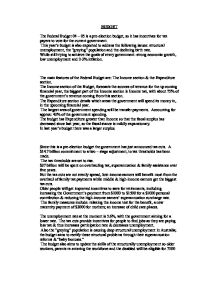 The Federal Budget 04 - 05 is a pre-election budget, so it has incentives for tax payers to vote for the current government.

BUDGET The Federal Budget 04 - 05 is a pre-election budget, so it has incentives for tax payers to vote for the current government. This year's budget is also expected to address the following issues: structural unemployment, the "greying" population and the declining birth rate. While still trying to achieve the goals of every government: strong economic growth, low unemployment and 2-3% inflation. The main features of the Federal Budget are: The Income section & the Expenditure section. The Income section of the Budget, forecasts the sources of revenue for the up coming financial year, the biggest part of the Income section is Income tax, with about 75% of the government's revenue coming from this section. The Expenditure section details which areas the government will spend its money in, in the upcoming financial year. The largest area of government spending will be transfer payments. Accounting for approx: 43% of the government spending. The budget has Expenditure greater than Income so that the fiscal surplus has decreased since last year, so the fiscal stance is mildly expansionary. ...read more.

The government has said that the fall in unemployment, to a 23 year low is due to lasting improvements. Years of economic changes has made the economy less prove to booms & busts; which has made steady & sustainable falls in unemployment more possible. Australia is however facing an on set of new long -term pressure from ageing of the population. A report on the Australian economy, has found that the unemployment rate is close to its "structural" limit, which suggested further reforms are required to drive the unemployment rate lower. The budget includes tax cuts and changes to welfare benefits, which are hoped will boost productivity and participation, by encouraging people to work harder. There is also the issue of the high levels of underutilised labour, which has not been addressed in this budget. Falls in the unemployment rate have also saved the government money through lower welfare payments. The government has kept inflation low, with the budget surplus. Since they want structural unemployment to decrease, a lower inflation rate may be achieved without threatening a short term increase in unemployment as well. ...read more.

The meltdown will be fierce if the economy slows a little and households start tightening belts. The Government is counting on the world economy remaining strong and the housing market staying buoyant. The budget also includes an aged care package of more than $1.6 billion, a big increase for road and rail infrastructure and higher spending on defence, security and research, a security package to increase the number of intelligence officers, upgrade equipment and allow resourcing in agencies for 24 hours, seven days a week; research funding package of $5 billion over five years for projects designed to provide commercial benefits to scientific research and innovation. It also includes funding for a medical school at the University of Western Sydney.The Government will continue to announce further spending after the budget - such as details of the new road and rail plans - in a bid to build momentum for the election.While the budget has forecast household consumption growth to ease, low unempolyment and the tax cuts and family support payments announced yesterday would help offset the slowdown. Last years budget papers warned world economy could drag australia down but this risk has now disspated. ...read more.