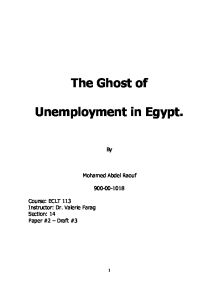 The Ghost of Unemployment in Egypt.

This research estimated that the annual increase in the labour force per year is equal to 2.7, which is greater than the population increase (Egypt 2). The ghost of full employment is one of the major topics that Egypt is trying to find a solution to. Fatemah Farag, a famous writer for Al-Ahram Weekly, stated that the second meeting of the new cabinet, chaired by the Prime Minister Atef Ebeid, discussed ways of alleviating rising unemployment which has now reached 1.4 million (1). In addition to all this great labour unemployment, the government is not capable of supplying sufficient jobs for the graduating college students every year, so this number is increasing every year. "A recent report prepared by the Shura Council's Human Resource Committee estimated that the labour force would reach twenty million by the year 2000." (Farag 1). These number shows that the Egyptian job market is not capable of absorbing all the unemployed labour force. Nader El-Fergany, head of Almishkat Research Center, has concluded that little over 700,000 new job opportunities were created in the recent five years, but this number is needed to be created annually to absorb all new entrants. (Farag 1). "The World Bank estimates suggest that half a million new job will be needed annually for the next several years to take the new entrants in to the labour market and make inroads into the present backlog of unemployment." ...read more.

So there are 300,000 new jobless people each year in addition to workers who have been laid off by the public sector companies." (El-Fiqi 4). In conclusion, overpopulation and privatization are the main causes of unemployment in Egypt. Egypt now is making a program of decreasing the birth rates to stop the rapid increase in the population, but privatization problem still a big problem to the workers in the public sector as they feel insecure to lose their jobs. The thrust of most currently proposed solutions to unemployment is to encourage a mixture of programs that either prepare people better to fill new job vacancies when they arise or offer them temporary work placements (Philpott 218). The government is doing its best to decrease the unemployment rate, as Dr. Atef Ebeid says that the government attaches great importance to the issue of unemployment and the creation of job opportunities and had actually completed an overall plan that will provide 150,00 new government and private sector jobs, 2000,000 jobs in the small industries domain (Arabic News). Egypt is making great projects as Toshka and the reclamation of the desert in Sainai. These projects will aid to solve the problem of unemployment as they may offer many job opportunities for unemployed workers. Naguib Mahfouz declared that "When Toshka project is complete, it will pave the way for the creation of a new Egypt. It will solve many of the problems plaguing us: the shortage of arable land, the lack of housing and unemployment. ...read more.