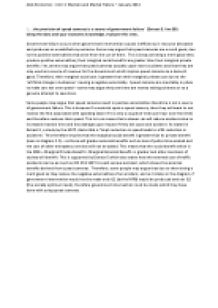 . . . the provision of speed cameras is a source of government failure (Extract E, line 20). Using the data and your economic knowledge, evaluate this view.

Therefore, if the provision of speed cameras by the government actually increases the number of accidents on the road, this could be argued as a form of government failure (perhaps through ?policy myopia? for short term fixes on problems with speeding) through the use of them being a demerit good. It states in Extract E how some motoring groups say that ?motorist behaviour? and not speed is the cause of accidents. Extract E states how speed cameras ?artificially change driver behaviour into something they would not normally do?. Therefore, this results in accidents by the driver as a result of the government placing speed cameras and the use of speed cameras actually results in the misallocation of resources causing government failure. This is shown in the negative externalities diagram, where the social cost exceeds the private cost. This shows that socially, the optimum level of production is at Q2 yet is the market fails to include the external costs created from speed cameras (slowing down and speeding up causing accidents) than output will be Q1. Therefore, from a social welfare point, there are too may speed cameras being produced and causing accidents, so they are considered as a demerit good. ...read more.

Therefore, they are spending money wastefully on goods that are not needed. In conclusion, many may argue that speed cameras generate positive externalities from reduced traffic accidents while others may argue that they cause more accidents and therefore cause negative externalities. Perhaps, the question to answer is what their main use is. If their main use is to raise revenue for the government than this may be a source of government failure as the data in extract D shows that the costs of operation for speed cameras are over £2,000 thousand greater than their fine income revenue. However, in my opinion, as stated in Extract E the speed cameras can reduce accidents by up to £30 239 000 in selected areas, so even though their economic costs of operation are greater, the benefits they bring from the lives and money they save (from the external costs with accidents) outweighs this. Extract F states how casualties have almost halved over ‘8 years due to speed cameras’, so the cost saved from not only the money from reduced police and emergency service costs but also lives – with are irreplaceable. Thus, I would argue that the provision of speed cameras is not a source of government failure. ...read more.