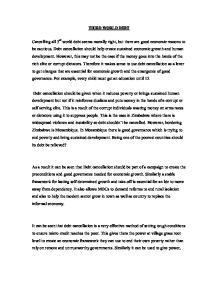 THIRD WORLD DEBT Cancelling all 3rd world debt seems morally right, but there are good economic reasons to be cautious. Debt cancellation should help create sustained economic growth and human development. However, this may not be the case if the money goes into the hands of the rich elite or corrupt dictators. Therefore it makes sense to use debt cancellation as a lever to get changes that are essential for economic growth and the emergence of good governance. For example, every child must get an education until 12 Debt cancellation should be given when it reduces poverty or brings sustained human development but not if it reinforces dualism and puts money in the hands of a corrupt or self serving elite. This is a result of the corrupt individuals wasting money on arms races or dictators using it to suppress people. This is the case in Zimbabwe where there is widespread violence and instability so debt shouldn't be cancelled. However, bordering Zimbabwe is Mozambique. ...read more.

Our debt cancellation judgment must look at each country individually and ask whether debt cancellation can reduce poverty. This should be far more important than the self interest of a country and banks. Similarly governments declare aid and debt cancellation but fail to carry out promises made. The conditions set must be sensitive to the obstacles and potential of each country. Therefore fixed conditions or free market ideology should not be imposed. In contrast negotiations should take place with local officials and economists as they know what's best for a country. In order to make the best use out of debt cancellation it may be best to gradually relieve debt in a number of instalments. However, there is an extreme position when immediate relief is essential. This occurs when debt servicing is unsustainable and repayments of capital with interest are greater than a country's annual exports. At this it seems morally incorrect for mdcs to demand there money back. Another major issue surrounding 3rd world debt is the demand for foreign currency. ...read more.

In comparison Incompetent government borrowed and wasted money as institutions didn't exist to utilise the spending. Similarly why should banks suffer because of these misjudgements in LDCs. There is a high opportunity cost of cancelling 3rd world debt including education spending and pension funds. If we cancel the debt of Pakistan because they have improved their institutions and have worked towards improving human development it can create a dilemma. India will argue that they have worked hard in paying off debt and deserve debt cancellation. Debt cancellation is too often a tax on poor people in rich countries that ends up as benefit to the rich in poor countries Encourages people to muck about and waste money then go back and ask for more. Should this misallocation of money be payed for by the west instead of spending on healthcare and education? Overall it can be concluded that third world debt is extremely damaging to an ldc and should be cancelled. However, debt cancellation should be a process where demands associated with economic growth and human development are met. The process should include debt cancellation in instalments and not in one go. ...read more.