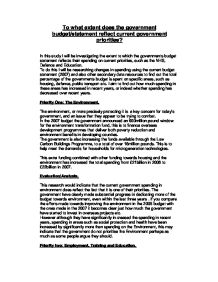 To what extent does the government budget/statement reflect current government priorities? In this study I will be investigating the extent to which the governments budget statement reflects their spending on current priorities, such as the NHS, Defence and Education. To do this I will be researching changes in spending using the current budget statement (2007) and also other secondary data resources to find out the total percentage of the governments budget is spent on specific areas, such as housing, defence, public transport etc. I aim to find out how much spending in these areas has increased in recent years, or indeed whether spending has decreased over recent years. Priority One: The Environment. The environment, or more precisely protecting it is a key concern for today's government, and an issue that they appear to be trying to combat. In the 2007 budget the government announced an 800million pound window for the environment transformation fund, this is to finance overseas development programmes that deliver both poverty reduction and environment benefits in developing counties. The government is also increasing the funds available through the Low Carbon Buildings Programme, to a total of over 18million pounds. This is to help meet the demands for households for microgeneration technologies. This extra funding combined with other funding towards housing and the environment has increased the total spending from �21billion in 2006 to �22billion in 2007. ...read more.

The fact that government is quite substantially increasing the budget over the coming years indicates that in the area of Defence at least the government is reflect the fact that it is a priority in its budget allowance. According to the latest figures (2005), the UK is the second highest spender (in cash terms) on Defence in the world behind only the United States. At 2.5% (2006) of GDP, the Defence Spending of the UK is above the NATO European average. We spend about the same proportion as France and more than Italy and Germany. Priority Four; Health. Health or more precisely the NHS has always been a key concern of the government and also a major source of expenditure. So with this in mind it is not a surprise to discover that the budget for health is ever increasing. - In 2002, the chancellor announced the biggest ever increase in the health budget. A increase of �40billion by the time it reached 07/08. - Further more in 2006 the health budget was �96billion, in budget 2007 this had been increased by �8billion to �104billion. - Until 2010-11 spending on the NHS will be increased by 4% a year in real terms starting from 2007/8. Evaluation/Analysis. The government is quite clearly reflecting the importance of the NHS within the United Kingdom in its budget, with huge increases in spending over recent years. ...read more.

Although the government aims not to borrow a lot of money, net debt was �512.4billion at the end of January, compared with �480.1billion a year earlier. The pre-budget forecast for the net debt at the end of March 2008 is �542.2billion. this in its self may be a cause of the governments inflation problem, because in theory they are falling victim to the credit crunch just as any other person with large credit card bills etc, however just on a much larger scale. As one of the main government priorities is to keep unemployment low, they have been investing large amounts of money into training schemes and other projects, this subsequently led to the unemployment rate falling to 5.2% in February 2008, this was down 0.2% over the quarter and down 0.3% on last year. 29.4million people were in word in the period October to December, this is the highest on record, up by 175.000 on the quarter and up by 296.000 on last year. Unemployment in October to December was 1.61 million (5.2%) - down by 61,000 unemployed on the quarter and down 86,000 from this time last year. this recent drop in unemployment could also be the result of the governments investment in education. This clearly indicates that the government is at least being partially successful in managing the economy, however it is certainly not fair to say that the government is totally successful in managing the economy, with such things as interest rates and inflation on the rise. ...read more.