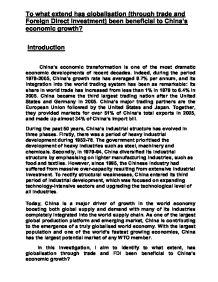 To what extent has globalisation been benefical to China's economic growth?

To what extend has globalisation (through trade and Foreign Direct Investment) been beneficial to China's economic growth? Introduction China's economic transformation is one of the most dramatic economic developments of recent decades. Indeed, during the period 1979-2005, China's growth rate has averaged 9.7% per annum, and its integration into the world trading system has been as remarkable: its share in world trade has increased from less than 1% in 1979 to 6.4% in 2005. China became the third largest trading nation after the United States and Germany in 2005. China's major trading partners are the European Union followed by the United States and Japan. Together, they provided markets for over 51% of China's total exports in 2005, and made up almost 34% of China's import bill. During the past 50 years, China's industrial structure has evolved in three phases. Firstly, there was a period of heavy industrial development during 1952-78. The government prioritised the development of heavy industries such as steel, machinery and chemicals. Secondly, in 1979-94, China diversified its industrial structure by emphasising on lighter manufacturing industries, such as food and textiles. However, since 1995, the Chinese industry had suffered from massive over-capacity resulting from extensive industrial investment. To rectify structural weaknesses, China entered its third period of industrial development, which was focused on expanding technology-intensive sectors and upgrading the technological level of all industries. Today, China is a major driver of growth in the world economy boosting both global supply and demand with many of its industries completely integrated into the world supply chain. As one of the largest global production platform and emerging market, China is contributing to the emergence of a truly globalised world economy. With the largest population and one of the world's fastest growing economies, China has the largest potential market of any WTO member. In this investigation, I aim to identify to what extent, has globalisation through trade and FDI been beneficial to China's economic growth? ...read more.

This could be one explanation for the link between China and economic growth. Already establish in the investigation, China specialises in exporting manufactured goods rather than services, so we can assume that China has a comparative advantage in trading manufactured goods, meaning they can obtain other goods and services they cannot produce efficiently themselves, and increase their international trade. The extent to which China has opened to foreign trade can be illustrated by the share of total trade in GDP over time. According to the World Bank Development Indicators10, in 1970, trade contributed 5.3 to GDP climbing to 34.8% in 1990, 44.2% in 2000 and rising sharply after WTO accession to reach a massive 65.4% in 2004 China: Share of Trade in GDP (Percentage) 1970 1975 1980 1985 1990 1995 2000 2003 2004 5.3 9.2 21.8 24.1 34.8 43.9 44.2 56.9 65.4 Theoretically, opening up domestic markets to international trade would increase the level of competitiveness in the market place, making businesses find better ways of producing goods more efficiently (at a lower cost). This is because trade encourages greater specialisation, which dramatically lowers costs and more intense competition, which is central to innovation. The graph below shows the correlation of trade and china's economic growth. As you can see there is a positive correlation between trade and GDP, suggesting that trade is an important factor for the economic growth in China. However, China's trade surplus (the value of exports net of imports) is a better measure of the contribution of international trade to the economy. Since 1990, the trade surplus has averaged about 2 to 3% of GDP, exports have grown faster than imports and China has had trade surpluses in all but 1 year from 1990 to 2003. The trade surplus peaked at 4.5% in 1997-98. China's trade surplus of $25 billion amounted to 1.8% of GDP in 2003. China's trade liberalisation has created an attractive business environment and therefore has had a significant impact on FDI inflows. ...read more.

All factors including industrial output, increased productivity and efficiently within the industry, high level of consumer saving, early consumption and Government policies have all had an impact on the outcome of economic growth. China has the potential to continue its rapid growth in the foreseeable future. The factors that have propelled growth over the past 30 years are still in place. China's economy is still a long way from "mature" status where growth rates tail off. If the Chinese Government wishes to keep their economic growth at such a high rate, they must face challenges such as exchange rates, structural imbalances and a troubled banking system, in order for them to continue to grow As long as China maintains an open attitude toward foreign investment and invests heavily in infrastructure and other capital, it will continue to grow rapidly. 1 Table 1- source/information from internet site: www.uscbc.org - The US-China business council 2 Table 2 - source/information from internet site: www.imf.org - The International Monetary Fund 3 As stated by, "China: A study of dynamic Growth"...www.ers.usda.gov 4 Data from www.imf.org 5 Source/information - World Bank and UN Commodity Trade Statistics as reported in World Bank (2004), Table 13.2 6 Graph - UN Commodity Trade Statistics Database (COMTRADE) 7 Source: China's Customs Statistics 8 Source/information - IMF Balance of Payments Statistics (2006) 9 Source/information - IMF Balance of Payments Statistics (2006) 10 Source - World Bank World Development Indicators Database 11 Data from http://www.uschina.org/ 12 OECD (2003) op. cit., pp. 37-40 13 http://www.uschina.org/statistics/2004foreigninvestment.html 14 OECD - China's industrial linkages: Trends and policy implications.p7 15 OECD - China's industrial linkages: Trends and policy implications.p.7 16 Information - http://www.index-china.com/index-english/agr-reform-s.html 17 Source - China national Bureau of Statistics 18 In comparison, the U.S. savings rate was 10.7% in 2004. Savings defined as aggregate national savings by the public and private sector as a percentage of nominal GDP- Economist Intelligence Unit database ?? ?? ?? ?? ...read more.