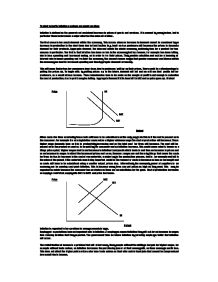 To what extent is inflation a serious economic problem.

To what extent is inflation a serious economic problem Inflation is defined as the general and sustained increase in prices of goods and services. It is caused by many factors, but in particular three factors have a major effect on the value of inflation. The first cause is too much demand within the economy. This occurs when an increase in demand cannot be countered by an increase in production in the short term due to fixed factors (e.g. land) and so producers will increase the prices to decrease demand for their products. Aggregate demand, the demand within the whole economy, suddenly rises for a product for two reasons in particular. The first is that inflation has been so low in the economy that tax revenue, for example has been falling, due to less spending and increased saving, so in order to 're-flate' prices. They provide subsidies and ask for a lowering of interest rate to boost spending and 're-flate' the economy. The second reason maybe that greater consumer confidence within the economy has lead to increased spending and thus Aggregate demand increasing. This will mean that prices for consumers have risen, due to producers 'pulling' up their prices. There could be a disadvantage to pulling the prices up. ...read more.

Due to the sheer volatility of inflation rates investment can be hard to plan. This may lead to the value of their inputs being higher than the value of the output, and so losses may occur. This can be seen as a serious problem as investment will fall for a product, thus leading to a fall in productivity and thus redundancies have to be made to make up for financial loss. With inflation people will have to search for goods that will give them good returns for their savings to help protect their real earnings. The cost of doing this is known as the Shoe Leather Cost. This maybe good for the consumer as it encourages more firms to be price competitive, also showing which suppliers are adjusting their prices for inflation, but could be seen as a problem because consumers may have to travel far to get the best returns. Menu Costs are also included in assessing problems with inflation. Menu Costs are the costs of changing the labelled prices of goods according to inflation so they are affordable. This maybe a problem for suppliers as inflation rates are sometimes very volatile especially in periods of high spending and low interest rates. ...read more.

The problem that is always on the government's mind is whether this inflation will affect the way the country is run. For example if the inflation leads to mass unemployment, will they lose votes. Demand Side Policies: help the government reduce aggregate demand, demand pull inflation, by imposing higher taxes on spending and increasing interest rates, discouraging borrowing and encouraging saving. Supply Side policies are used to make the labour market more competitive, in effect reducing the costs from businesses which could give rise to cost push inflation. So using these policies they reduce the power that trade unions have. For example so they cannot campaign for certain things that can cost the firms that their clients work for a lot of money. The severity of the problem of inflation is shown by the fact that even the government see it as a major problem, they even go to the extent of making policies to stop inflation increasing. However the extent to which the problem is regarded serious is debateable. Prioritising it, in the government's eyes it is at the top, in businesses eyes it may not be a major key in their production process. Inflation can be regarded as a major economic problem when looking at the status of the national economy; it has many costs and hardly any direct benefits. ...read more.

This essay engages superbly with the question. There is a clear progression from knowledge of what inflation is, how it affects the economy, and then a discussion of the extent to which it is serious. The key part that this ...

This essay engages superbly with the question. There is a clear progression from knowledge of what inflation is, how it affects the economy, and then a discussion of the extent to which it is serious. The key part that this essay addresses, that most others don't, is the extent. By doing this, this essay is able to access all the levels and will gain the top marks due to the perceptive analysis and evaluation throughout. I liked how they used phrases such as "it depends upon" as this shows a strong awareness that economics isn't clear cut, and it varies with each situation.

The analysis here is superb. The definition of inflation is clear, and the causes of inflation are outlined well. I particularly liked the use of diagrams to show the effects of inflation, as that's what this question is implicitly wanting. There needs to be a discussion of the effect on real GDP and the price level, and this essay manages this with diagrams. A suggestion with diagrams would be to have a sentence such as "An increase in aggregate demand causes a shift from AD to AD1, which causes macroeconomic equilibrium to change, with P moving to P1 and Q increasing to Q1". A sentence such as this is an easy way to secure analysis marks. The main costs and consequences of inflation are explained well. The mechanisms are explained step by step, showing how an increase in inflation will affect businessmen, etc. Such technique shows strong understanding of the technical concepts. What was very strong in this essay was the consideration of viewpoints. They are right to question whether each party will see inflation as a serious problem, and goes onto discuss whether inflation is seen differently. Perceptive evaluation is what they are looking for when awarding the top marks.

The structure here is strong, as it has a clear introduction and progresses through knowledge and analysis, giving the foundations for the later evaluation. By doing this, it makes it easier for examiners to allocate marks. Technical terms are used fluently, and the style is strong which makes for a convincing argument. Spelling, punctuation and grammar are strong. An essay to be admired!